Since The First Thanksgiving, American Food Has Been Immigrant Food 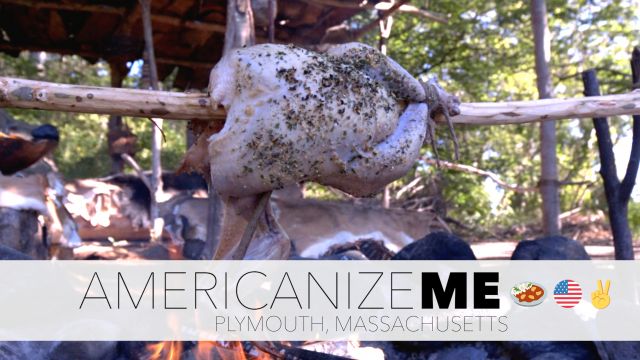 In this episode of "Americanize Me," we head to Plymouth to learn the immigrant history of the Thanksgiving dinner.

America is a country of immigrants. And that includes your food. Immigration is the pulse of our nation. The heartbeat that drives almost all of culture. It's in our language, our music, our customs and especially on our plates. In "Americanize Me," we're getting a taste of our melting pot, salad bowl —whatever your preferred metaphor.

When it comes to Thanksgiving, most Americans are used to a storyline that isn't entirely true. So that's why today we're bringing you to Plymouth, Massachusetts, where it all began. In this season finale of "Americanize Me," we're going to dig into the truth behind the holiday and discover how American your Thanksgiving meal actually is.

The true story goes a little something like this. In 1621, the Pilgrims in New England had their first successful harvest, and their governor, William Bradford, called for a celebration. At the time, the colony had some Native American allies, including the Wampanoag tribe chief, Massasoit. During the celebration, guns were fired. And Massasoit got word, thought there was a fight going on, and he and about 90 of his men came to help. Instead, they found the Pilgrims rejoicing about their harvest.

SEE MORE: How A Syrian Man Used Food To Connect To His New Home In Tennessee

"Nobody mentions turkey, in Thanksgiving in 1621, the meal we call Thanksgiving, they don’t call Thanksgiving and Massasoit called sent his men out to bring deer, so venison is the meat we know is on the table, and everything else is speculation," said Kathleen Wall, a Colonial food culinarian. "I was once accused of being a turkey denier. I'm not saying there aren't turkeys, I'm just saying, as a historian, I can't put them on the table."

If you think of American food as a timeline of foods traveling here with immigrants, then some of the foods we eat at Thanksgiving are at the very beginning of that timeline.

KW: "Many of them are foods that don't belong here and were brought here, and the foods that were here were cooked in ways that would be unrecognizable to both the English and the native people of 1621 Plymouth colony. What's more American than apple pie? And actually I would contend that nothing is more American because apples aren't indigenous here. Apples were brought over."

NT: "Apples are not American?"

KW: "Apples are not American."

NT: "Why do you personally think Thanksgiving is such an important American holiday?"

KW: "I think it's the one holiday, it's the one day of the year that Americans celebrate by actually celebrating. And there are many common components. We take time out to spend with family. And it's a common meal. Something like 98 percent of households have turkey on their table on that Thursday in November."

And in this case, a Thanksgiving meal brought together Tagouri, a Colonial expert and a native person — talk about shaking up history.

SEE MORE: Americanize Me: Delicious Stories From The Melting Pot

NT: "What would you want Americans today to know when they're eating Thanksgiving dinner, and what to just think about when it comes to the history of what's on their plates?"

KW: "There's no one right Thanksgiving dinner. What's right about it is that we pause and give thanks. We forget that we're a colonial nation. There were people here for thousands of years before there were colonies, and we need to remember them, too. And they've been a forgotten part of the story for a long time."

"What about the natives in your community today. Do most of them celebrate or they don't?" Tagouri asked.

"I think you're going to find a 50/50," Turner said. "People certainly get together, like at the protest. And then, some people probably do a turkey dinner. So as native people, we ask people not to dress in our traditional clothing. If you want to honor us, learn about us."

"One of the ways that we can honor native people is to recognize the food that we got from native people," Wall said. "Looking at the corn on the table, pumpkins the same thing, cranberries the same thing — these are all native foods that were here, particularly in New England, right from the beginning."

Noor is a journalist and speaker who breaks down cultural barriers — from sexism to Islamophobia and more. While her storytelling and public speaking have drawn profiles in Marie Claire, The Washington Post and elsewhere, she's also launched #TheNoorEffect, a clothing line created to empower women and combat sex trafficking. Noor works out of Newsy's Washington, D.C. bureau but covers stories across the globe. And one more thing she's passionate about? Food. She's a walking encyclopedia of the DC dining scene, which means you should definitely ask her for restaurant recommendations. You can also follow Noor on Twitter, Facebook and Instagram. @NTagouri