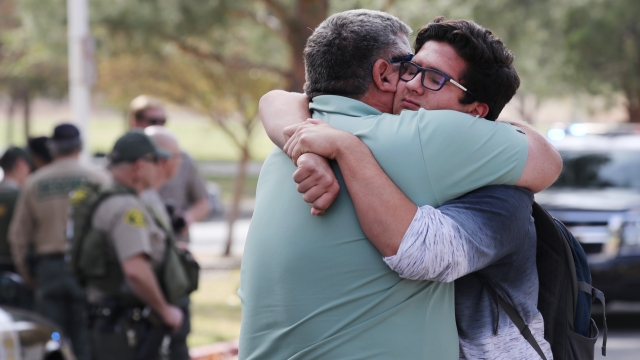 The bells were still ringing at Saugus High School Friday morning — as were the sound of  gunshots for students Kyra Stapp and Zoe Rex. Both students were barricaded in their English classroom during the shooting on Thursday, November 14.

"I remember the sound clearly," said student Zoe Rex. "You know, I remember that, like the feeling of starting to panic and then having to calm down so I could help my friends calm down and keep myself steady. You know, it's just – it's terrible."

"It made me feel like we're out in the open, like we're gonna die," Stapp told Newsy. "Like, I really thought for a second that I could die. And that's something that, like, I shouldn't have to feel."

Saugus High School was prepared to respond with immediate mental health counseling. A school district spokesperson tells Newsy crisis counselors have been providing help since Thursday and will continue through the weekend.

The National Center for PTSD estimates that 28 percent of people who have witnessed a mass shooting develop post-traumatic stress disorder and about a third develop acute stress disorder. The American Psychological Association says reactions to trauma can include development of new fears, sleep disturbance, nightmares, sadness, reduced concentration, or irritability.

"I woke up at 5:00 because something fell off of my bed and laid on the floor like that," Rex said. "And I woke up like almost crying, almost screaming. It felt like something was like right here. You know, and I had to look around like, okay, I'm just in my room."

Churches around the area have opened their doors to anyone who wants to mourn and grief counselors have been meeting with families. Henry Mayo Newhall Hospital treated several of the victims and is supporting first responders.

The LA County Sheriff says the shooting at Saugus High School took 16 seconds from start to finish. For those affected, the mental recovery will last far longer.

"It just it just scares me to ever want to come back," Stapp said.