The Hyped-Up Big Bang Discovery Has A Dust Problem 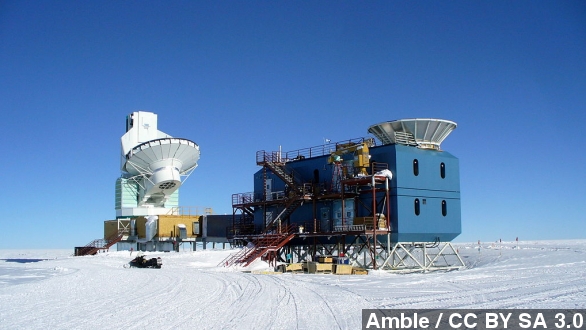 SMS
The Hyped-Up Big Bang Discovery Has A Dust Problem

By Matt Picht
September 22, 2014
An analysis of new satellite data casts serious doubt on a previous study about the Big Bang that was once hailed as revolutionary.
SHOW TRANSCRIPT

What was previously heralded as the most important, cosmically significant scientific discovery of the decade has just been dealt a crippling blow, and it's all thanks to a patch of space dust.

The story starts at the South Pole, where the BICEP2 telescope was busily scanning the background radiation which permeates the entire universe. Scientists were looking to detect tiny fluctuations in this radiation, evidence of a phenomenon known as gravitational waves.

In March, scientists announced they had found patterns left behind by those waves. The discovery was presented as proof of cosmic inflation theory – the idea that the universe went through a rapid, explosive expansion in its first few microseconds. (Video via Nature)

When we first reported the story, we did our best to explain the intricacies of the finding. But it's difficult to get a good grasp on what gravitational waves are, much less explain the concept.

So for now, what you need to know is that the research provided the first direct evidence supporting one theory about what happened after the Big Bang, and was announced with a lot of fanfare.

MARC KAMIONKOWSKI VIA HARVARD-SMITHSONIAN CENTER FOR ASTROPHYSICS: "This detection is cosmology's missing link. It's something we thought should be there, but we weren't really sure. ... This is not something that is just a home run, but a grand slam."

But once the hype faded, doubts began to emerge. The team made their announcement before the results were peer reviewed or published, and some physicists started questioning the accuracy of the data and the analysis behind the discovery.

One of the most damning critiques came Monday, from a large team studying data collected by the European Space Agency's Planck spacecraft, which has been systematically examining the distribution of cosmic dust in the night sky.

Their analysis shows that the Bicep team may have dramatically underestimated the amount of dust interfering with their telescope's vision. Distortions that were attributed to gravitational waves might have just been dust particles all along.

To be clear, the new study doesn't completely sink the original findings — the BICEP and Planck teams are currently working together to figure out how much cosmic interference might have fouled up the BICEP2's measurements.

But it's a kick in the teeth for proponents of cosmic inflation theory, and vindication for the study's skeptics. One cosmologist involved with the Planck study told Quanta, "They more or less assumed that they could find a piece of the sky with low dust emission. ... And the Planck result shows there is no part of the sky where you can ignore the dust."

Some BICEP2 scientists are keeping their spirits up, though: one study lead told The Washington Post they're working to refine the methods used in BICEP2 for future analyses. "So basically, if BICEP2 result doesn’t turn out to be a grand slam after all, we are still playing with the bases loaded."

This video includes an image from Amble / CC BY SA 3.0.