The Hustle Rundown: Who's Helping Those Kiwibots; How Baked Goods Rise 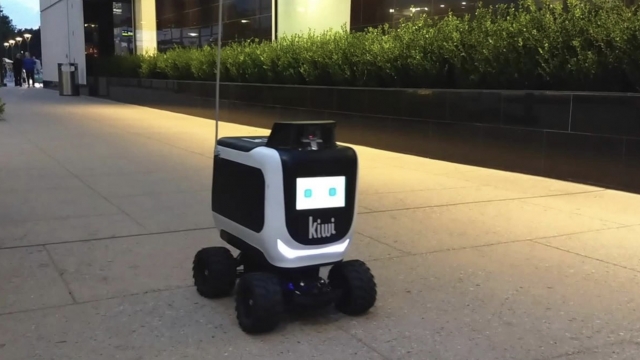 The Hustle's Wes Schlagenhauf breaks down some of the biggest business news of the week. Turns out Kiwibots rolling onto campuses are getting help.

On Friday the FDA held its first hearing with manufacturers and scientists to learn more about the possible impacts of long-term CBD use. Manufacturers urged the FDA to craft regulations so they can legally add CBD to everything under the sun, but does CBD really need to be in makeup?

That’s the billion dollar question…that no one can seem to answer. And unfortunately for manufacturers, the FDA wants to see some hard evidence of the drug’s health benefits before constructing regulatory framework.

When asked the functional purpose of adding CBD to beauty products, James Shults of Wildflower — seller of CBD-infused soaps and topicals — told panelists that’s it’s less about the science and more based on the opinion of the consumer.

Here's the thing: If CBD in makeup turns out to cure face fissures and crows feet, then by all means throw it in. But scientists at the hearing, and in general, continue to stress to regulators how little they know about CBD.

Ever heard of Kiwibots? Students at UC Berkeley have, and professor Schlag’s about to blow their minds. Open your ears campus dwellers, because white boy’s about to preach.

Kiwibots, AKA futuristic rolling robo-degas that deliver burritos and smoothies at UC Berkeley, have taken the campus by storm. But, while the nefariously cute burrito-bots appear to roam the campus autonomously, the San Francisco Chronicle reports they're actually being operated by remote workers in Colombia who make $2 an hour.

And Kiwi Campus, the company that makes them, is trying to pretend these are fully autonomous. According to the report, Kiwi Campus' technology page shows several videos of Kiwibots using complex "computer vision" to cross streets and identify obstacles.

What the site doesn’t showcase is the remote workers who use GPS and cameras to manually send the robots instructions every 5-10 seconds. But Kiwi Campus insists they're telling the truth, labeling its system as "parallel autonomy."

Sorry, I just threw up in my mouth a little. I’m deathly allergic to buzzwords.

Anyways, time to pivot to a rising issue in the American bread industry. Over the last decade U.S. bakeries have worked to bake healthier bread per consumer demand.

But the sexy side of American baked goods i.e. cakes, crumpets, and cro-nuts can't afford the health-hit. Meaning they still often use white bread filled with whiteners that would seem to be unchill to the human body — but don't worry, those same ingredients are great for yoga mats, pesticides, and petroleum products, which somehow gives the FDA all the proof they need to confidently say the additives are generally safe to eat.

In other words: They aren't necessarily harmful to human health, even though the agent used to help bread rise has been linked to kidney and thyroid cancers in rodents.

Agents like potassium bromate and a few others used in American breads are so suspect that many other countries such as China, Brazil and members of the EU have outlawed the additives in not just bread, but ALL food after doing their own research.

And that does it for today, folks. Be sure to tune into Newsy this Thursday at 1pm eastern for more of the Hustle Rundown, and make sure to sign up for the Hustle newsletter @thehustle.co for your daily dose of stories exactly like these.