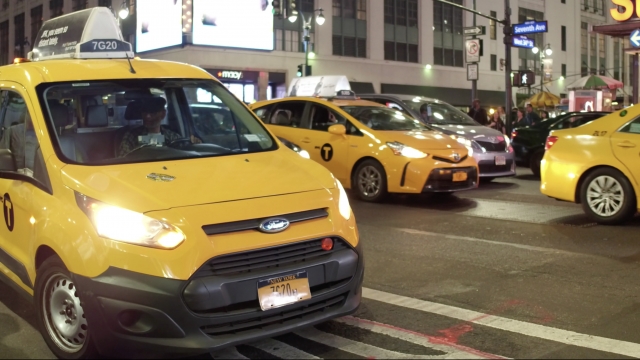 SMS
The Hustle Rundown: NYC Cabbies Suffer; Goop For Guys
By Newsy Staff
By Newsy Staff
May 23, 2019
The Hustle's Wes Schlagenhauf breaks down some of the biggest business news of the week. Here he explains why NYC taxi cab drivers are struggling.
SHOW TRANSCRIPT

A few days ago, Chevy introduced a new "Buckle to Drive" feature to prevent cars from starting until drivers buckle their seatbelts. How do they build something like that? I have no idea. But I do know that it starts with collecting data.

But as cars become more advanced, you have to wonder: Who is your car actually driving for? In the comfort of your own vehicle, you'd think you'd be safe from algorithms analyzing your every lucid moment like a vintage Randy Jackson episode of "American Idol," but some modern cars collect as much as 25 gigabytes of data per hour.

And we're not just talking vehicle performance — the tech also tracks where we live, who we text, even what restaurants we eat at.

The real roadside emergency is how all this data is used: It doesn't go to the car's owner. It's delivered to carmakers and any third parties willing to pay for it. Pay for it, you say? Oh, yeah, turns out car data is big business already, and it's fixing to be worth as much as $750 billion by 2030.

You know what I love? Corporations making money off of humans for merely existing as a part of functional society. It's so moral.

Now, onto a different kind of car scam. Taxi medallions were created by New York City in 1937 to cap the number of taxis cruising the streets, which in turn created a stock exchange of sorts for the cabbie coin. Interesting, huh?

Well, New York City's medallion market crashed in 2014, and according to the New York Times, since then, 950 cab drivers have declared bankruptcy. I know what you're thinking: "Uber and Lyft are the devil." Right? Wrong … well, maybe. Time will tell — but not in this case.

Between 2002 and 2014, brokers, lawyers, fleet owners and debt collectors drove up medallion prices from $200,000 to more than $1 million to increase profits.

Of course, cabbie salaries stayed the same, so they couldn’t afford them — but don’t worry, out of the kindness of their hearts, lenders offered drivers loans so they could ... bless.

So how did these scumbags avoid scrutiny? Easy: They blamed Uber and Lyft. Which is somewhat fair — since Uber arrived in New York in 2011, cab revenues have fallen 10 percent.

But, in that same time, medallion prices have lost more than 90 percent of their value.

OK, we're done talking about cars. In other news, it's Goop for guys! You know Gwyneth Paltrow's $250 million wellness empire, Goop? The one that tells women healing crystals will benefit their health, based on shoddy science.

Now, Paltrow's wading into the dude market with help from her company's new Goopfellas podcast. Brace yourselves, dudes, because you're about to get Goop'd.

The show's hosts will dig into a real goop-load of holistic health transformations by speaking with celebs and wellness pundits — you know, the experts.

The podcast aims to shed light on misdiagnoses and inspire men to take active and preventive care of themselves.

Which confirms that people will believe anything celebrities say — like the time Toby McGuire told me he’d be my friend if I invested in his jarred rainbow sand healing startup, which I did, because he’s friggin' early aughts Spiderman — and, plus, it’s healing sand — from a rainbow.

And that does it for today, folks. Be sure to tune into Newsy next Tuesday at 1 p.m. Eastern for more of the Hustle Rundown, and make sure to sign up for the Hustle newsletter @thehustle.co for your daily dose of stories exactly like these.