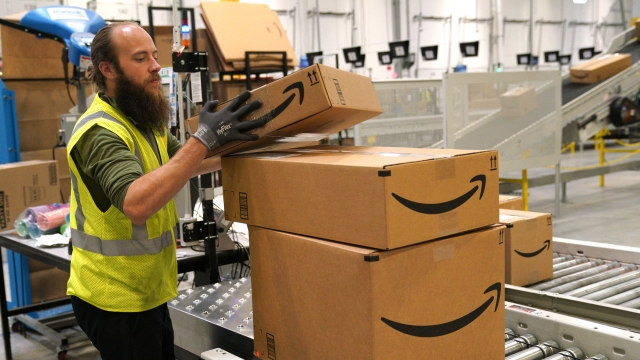 The Hustle's Wes Schlagenhauf breaks down some of the biggest business news of the week. Here he explains why Amazon doesn't owe any federal taxes.

Looks like Amazon won't be paying Uncle Sam a dime when it comes to 2018 federal taxes. Which is fair because it profited $11.2 billion.

When President Donald Trump signed the Tax Cuts and Jobs Act in 2017, he said it would curb special-interest tax breaks.

But according to the Institute on Taxation and Economic Policy, the bill had the opposite effect. According to ITEP, not only did it lower corporate tax responsibility to 21% — down from 35% in previous years — it also provided the same gaping loopholes and arbitrary write-offs as other plans in years past.

From 2008 to 2015, more than 100 profitable corporations paid zero or less in federal income taxes at least once. In the same time frame, AT&T, Wells Fargo, JPMorgan Chase, Verizon and IBM received a total of more than $130 billion in tax breaks.

Amazon isn't the only multibillion-dollar powerhouse to receive cash back from the government this year. Both Netflix and General Motors did as well.

And experts foresee corporate tax percentages going down before they go up.

Speaking of multibillion-dollar corporations, Walmart's been bribing global officials for the last decade. Last week, Walmart paid $282 million in fines after fessing up to paying officials in Brazil, Mexico, India and China to expedite its international expansion projects.

The company reportedly paid officials off in cash and cars.

When all is said and done, Walmart will end up paying $900 million over the course of the investigation.

But $900 million over the course of seven years is still far less than 1% of the company's yearly revenue, which is expected to hit $514 billion in 2019.

Throughout history, Afghanistan has been known for its fantastic fruits — watermelons, figs and grapes.

But wartime conflict and difficult forecasting has made it hard for farmers to get their fruits to market over the last decade.

And it has pushed the selling price of an entire ton of watermelons down to a devastating $11 — stay with me, it gets more uplifting I promise!

To help with the melon melee, the Afghan government ordered public officials to buy watermelons and give them to the country's most in-demand workforce — the troops spread across war-torn Afghanistan.

And it has finally started to work. Watermelon prices in some cities have already skyrocketed to four times their lowest price points from earlier this month.

And that does it for today, folks. Be sure to tune in to Newsy next Tuesday at 1 p.m. Eastern for more of the Hustle Rundown, and make sure to sign up for the Hustle newsletter @thehustle.co for your daily dose of stories exactly like these.