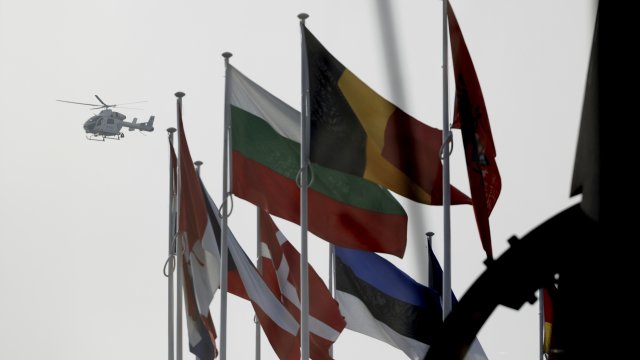 Thousands of NATO troops are training in Norway not far from the country’s border with Russia.

NATO says the drills are not linked to the war in Ukraine, but it is on everyone’s mind.

"Whilst this exercise has been long planned, it takes place against a dark backdrop," said Admiral Rob Baue, chair of the NATO military committee.

Russia’s invasion of Ukraine is putting the 30-country alliance on high alert and testing its core principle like never before.

For more than 70 years, NATO's Article 5 has stated that an armed attack against one member nation is an attack against all — an attractive protection, especially for smaller countries.

The North Atlantic Treaty Organization was created in 1949 by the U.S., Canada, and 10 western European nations as a counterweight to the Soviet Union.

“NATO was designed to keep the Americans in, the Germans down and the Russians out," said Paul Poast, international relations professor at the University of Chicago.

Since then, the alliance has more than doubled in size, adding 14 central and eastern European countries in the past 25 years.

Ukraine and Georgia were once part of the U.S.S.R., and when they expressed interest in joining NATO in 2008, Russian President Vladimir Putin responded by invading Georgia.

Putin says NATO’s eastern expansion is an existential threat to his country.

Earlier this year, he demanded that NATO retreat from eastern Europe and bar Ukraine from ever joining the alliance, but former NATO officials tell Newsy NATO is not about aggression.

“The real issue here is Putin does not want any of the countries on his borders to orient themselves towards the west and not towards Moscow," said Ian Kelly, former public affairs adviser with U.S. Mission to NATO.

In fact, for many current and aspiring members, joining the alliance means protection from Russia.

“It's not moving east, so to speak, as the east is moving towards it, and that's what is fundamentally misunderstood sometimes was as people try to react to what Putin says," said Gordon “Skip” Davis, former deputy asst. secretary general for defense investment at NATO.

NATO, which struggled to find a role in a post-Cold War world, has been greatly revitalized.

The bloc has been acting with surprising speed and unity in sanctioning Russia and supplying weapons to Ukraine — despite Russia warning they might target weapon transfers.

The alliance is now under pressure from Ukraine to do more — though how much more is the ultimate question.

"It is very important that the alliance presents a unified message that it will defend every inch of NATO territory, but on the other hand, because of Putin's strategic and tactical nuclear capability, no one wants to start a war with Russia." Kelly said.

On Thursday, President Biden and others will try to figure out how to strike that delicate balance.

Putin will likely be watching.