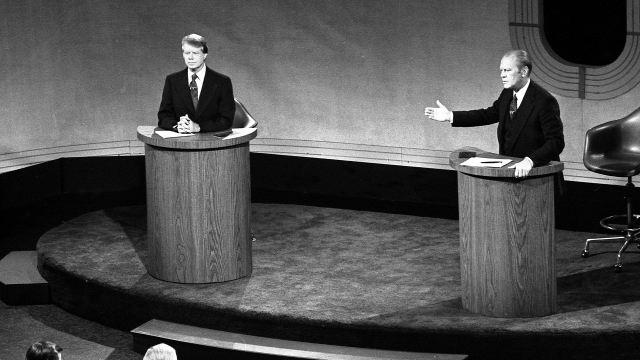 Televised debates are a mainstay of modern presidential campaigns in the U.S., but their history is relatively short.

The first televised presidential debate happened in 1960, after John F. Kennedy challenged Richard Nixon to a series of four of them. But making that happen required an act of Congress. TV networks lobbied lawmakers to waive the equal time provision of the federal Communications Act. That effectively allowed the networks to exclude third-party candidates from the debates.

The first Kennedy-Nixon debate was a turning point for Kennedy's campaign. At 43 years old, the Massachusetts senator faced criticism that he was too inexperienced and immature to be president. But during the first debate, he demonstrated poise and confidence, easing those concerns. He ultimately went on to win the election.

Sixteen years passed before there would be another presidential debate. Nixon refused to participate in debates during his presidential campaigns in 1968 and 1972, but his refusal was preceded by Lyndon Johnson during the 1964 campaign.

That brings us to 1976, when then-President Gerald Ford debated Jimmy Carter. During the second of their three debates, Ford made a now-infamous gaffe that some argue lost him the election.

"There is no Soviet domination of Eastern Europe, and there never will be under a Ford administration," Ford said.

When one of the moderators asked Ford to clarify, he doubled down on his original statement. However, at the time, the Soviet Union had control of a number of Eastern European countries. That mistake hit Ford's campaign hard. A week later, the president admitted he'd misspoken, but the damage was done.

Presidential candidates also debated each other in 1980 and 1984. The Commission on Presidential Debates was created in 1987, and since then it's ensured the leading candidates for president debate for the benefit of American voters.