The High-Tech Tools Scientists Use To Track Wild Animals 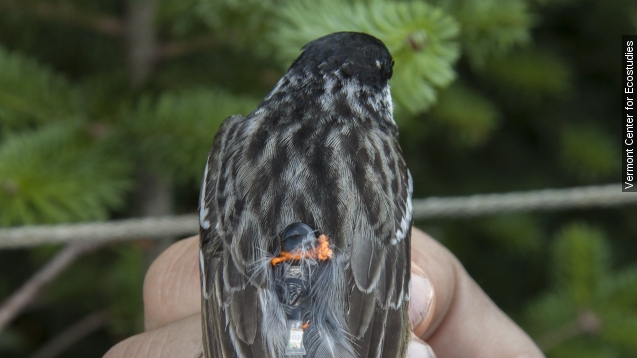 Science in recent years has seen an explosion of wildlife tracking-devices that are enabling new insights and scientific breakthroughs. (Video via National Oceanic and Atmospheric Administration)

That's the thesis of a recent paper in the journal Science, which argues tracking is essential in understanding how animals are reacting to the slew of environmental threats they face. (Video via Texas Parks and Wildlife)

But different animals require different tracking devices, and as the technology develops, those devices are getting increasingly specialized.

For birds and flying mammals, geolocators often take the form of a little solar-powered harness, which is fitted to the back of the animal and can weigh as little as half a gram. (Video via SongbirdSOS Productions)

To collect data in the past, most of those geolocators had to be retrieved through capture, but an increasing number are able to transmit data remotely, which enables scientists to track a bird over its entire lifespan. (Video via Smithsonian National Zoological Park, Untamed Science)

For large mammals, like this mountain lion, collars are the preferred tracking device. But, beyond tracking where they go, a lot of these collars can also monitor the cats' metabolism and behavior, among other things. (Video via National Science Foundation)

Some trackers go even further — with one group of researchers using a miniature EEG cap to study how sloths sleep in the wilderness.

Other devices let us take a more literal look at the lives of wild animals, with camera-fitted collars giving us, in this case, a bear's eye view of the wilderness. (Video via Missouri Department of Conservation)

Beyond learning about animals themselves, the researchers argue these advances allow scientists to use wild animals as sensors to monitor the changing planet: (Video via World Wide Fund for Nature)

"Recent examples include the monitoring of arctic temperatures and vegetation changes during climate change and documenting ocean currents, and in the future may allow for the estimation of altitudinal wind profiles based on bird flight parameters."

More broadly, the researchers argue, tracking wildlife is important in understanding the unpredictable ways animals adapt to that changing planet — and a vital tool for ecology in the future.

This video includes an image from Max Planck Institute for Ornithology.