The 'H' Symbol On Hondas Might As Well Stand For 'Hot' 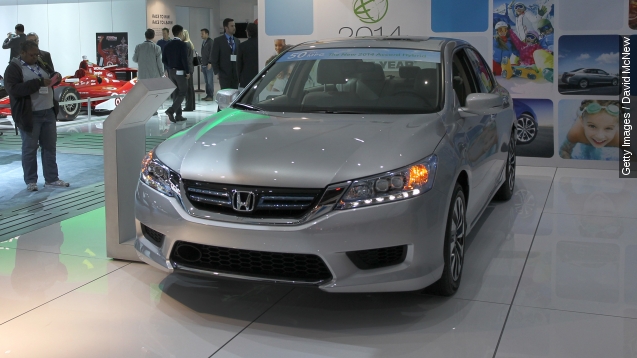 For the 12th year in a row, a Honda vehicle topped the National Insurance Crime Bureau's list of most stolen cars.

Once again, car thieves' two favorite targets have a big "H" on them, which at this point might as well stand for "hot." The Honda Accord and Civic were the top two most stolen vehicles in 2014, and the rest weren't even close. (Video via Honda)

The National Insurance Crime Bureau says the Honda Accord was No. 1 in thefts, with more than 51,000 stolen in 2014. The Honda Civic wasn't that far behind at nearly 44,000 thefts, but that's apparently where thieves' interest drops off in a big way. (Video via Honda)

The No. 3 most filched vehicle is Ford's F-series trucks, with more than 28,000 stolen last year. (Video via Ford Motor Company)

This is the 12th year in a row a Honda vehicle has topped the NICB's list.

As for why thieves love the Japanese cars so much, a lot of it has to do with reliability, a lack of security features in older models and just how many of these cars are on the road. (Video via Honda)

As one car security features company put it, "Because there are so many Honda Civics on the road, a stolen vehicle is less likely to be identified even immediately after the theft occurs. Try hiding in plain sight in a white Escalade, then try it in a lowly Civic."

And when these same vehicles were No. 1 and 2 last year, a company spokesperson told the Los Angeles Times that technology in Honda's cars made prior to 1997 basically make them really easy to steal.