The Growth Of Homeschooling, Even After The Pandemic 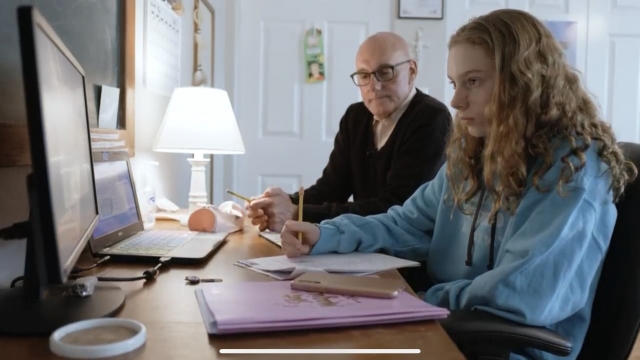 According to the latest data from the Census Bureau, homeschooling households spiked from about 3% pre-pandemic to about 11% by the fall of 2020.

Thirteen-year-old Caroline Dickinson used to go to a traditional school. But when the pandemic hit, she switched to homeschooling.

Class is held completely online with a virtual teacher, and sometimes additional tutoring from her mom Sarah or her dad Dorian.

It's part of a large shift in education that started with the pandemic and has continued, even as precautions like face masks and social distancing have been dropped.

The latest census found homeschooling households jumped from about 3% pre-pandemic to about 11% by the fall of 2020.

Andrew Bacher-Hicks, an education professor at Boston University, believes the homeschooling trend may be here to stay.

"So many families have still maintained their homeschooling routines rather than re-enrolling in the public school system," he said. "This isn't just a very short-term blip. There will be a continued drop in public school enrollments."

However, while many families are making that change to teach their kids at home, there aren't federal education guidelines and there's little uniformity from state to state.

"The idea of taking Caroline out of school was frightening," said Sarah Dickinson. "But the idea of keeping her in the school, with the lack of communication and consistency, it was just like months wasted."

It didn't matter to the Dickinsons that there isn't a national homeschool requirement. They found Bridgeway Academy, an accredited, paid homeschooling program that filled the Illinois requirement.

Bridgeway Academy has been around since 1989 — ranging from pre-K to high school — and costs families between $1,300 and $6,500 per year, depending on the program. They say they saw a boom in student enrollment during the pandemic.

"The pandemic really pushed a lot of people to select home education," Bridgeway CEO Jessica Parnell said. "For some, it was the fear of the virus. For others, it was the lack of confidence in what was happening with the schools for remote learning."

For Caroline, starting 6th grade at home with Bridgeway removed a lot of the distractions.

"Sometimes it's a little stressful," she said. "But I definitely like it better than normal school."

The Rochester teacher is accused of making Black students pick seeds out of cotton and handcuffing them during a seventh-grade class.

Caroline's mom is a trained educator and often substitutes at traditional schools, and she says it's made her recognize the benefits of homeschooling.

"Every time I did [teach in schools], I would come home and say, 'I am so glad you are here homeschooling because you're learning so much more than everybody being interrupted in the traditional school.'"

"Last year it was so successful," Dorian Dickinson said. "It's been rigorous, she has excelled and we couldn't be happier."

But the trend in homeschooling impacts student enrollment, particularly in public schools, which use head counts for future funding, budget and staff determinations.

"We saw many more kindergarten kids, for example, exit to homeschooling. And so it makes it really hard to predict how many first grade teachers the school system needs," education professor Bacher-Hicks said. "I think this is just going to add to the many challenges that school administrators, leaders and teachers are now facing as a result of the pandemic."

As for Caroline, she can still join social school activities like prom and extracurricular clubs at a nearby school. But homeschooling still has its challenges.

"Sometimes it can be a little frustrating having your mom or dad always with you," Caroline said. "But you definitely get used to it. You have to adjust. But once you do adjust, it's really good."

Plus, the flexible hours of homeschooling gives Caroline an opportunity to focus on what she's passionate about and pursue her dreams.

"I definitely want to try college gymnastics," she said. "And the Olympics has always been my dream since I was a little kid. "