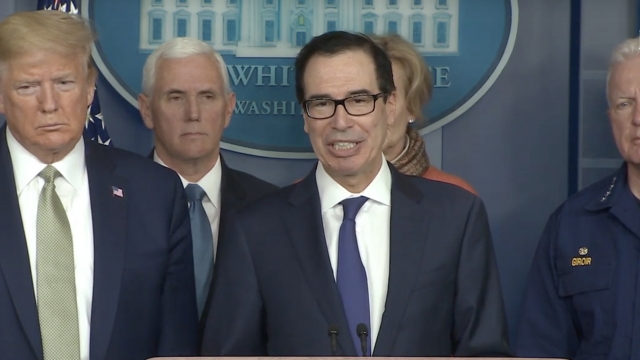 SMS
The White House Wants to Send Americans Money. Will It Help?
By Amber Strong
By Amber Strong
March 18, 2020
With many economists predicting a recession, a number of politicians want to send money to Americans. The concept isn’t new. But will it work?
SHOW TRANSCRIPT

“We need to put cash directly into American’s hands.”

Is now closer to reality.

The administration is asking for Americans to begin receiving direct payments as soon as April 6 in order to stave off an economic downturn.  The question: how to do it.

A plan from Senators Sherrod Brown, Michael Bennet and Cory Booker would give payments of two thousand dollars per American quarterly starting this month. Smaller payments would go out again in July if the economic downturn continues.

A Plan from Representatives Ro Khanna and Tim Ryan calls for sending 1000-2000 dollars per month to Americans making less than 130,000 last year.

Minnesota Democrat Ilhan Omar wants 1000 dollars for every American adult, with no exceptions.

GOP support is divided. With one Senate office telling Newsy its concerned about the price tag.

The US has done this before.

“In 2008, during the great recession president Bush requested legislation that made payments of, I think 600 dollars per family and half that amount 300 per child. It was too little and it was not enough. We had to do more, we came back with the recovery act under President Obama but even then the recession was very deep and lasted a very long time."

Economists also have some concerns. When the richest Americans receive these types of payments they tend to save it instead of spending it right away, which doesn't really stimulate the economy.

Plus, having cash doesn't necessarily lead to spending cash, especially when many Americans are being asked to stay home.

“If millions of workers are out of work and people are not spending money on going to amusement parks or movies, or restaurants, that’s going to reduce spending in the economy. We can make up for some of that with these payments but it’s not going to fill the whole gap. A recession is coming.”