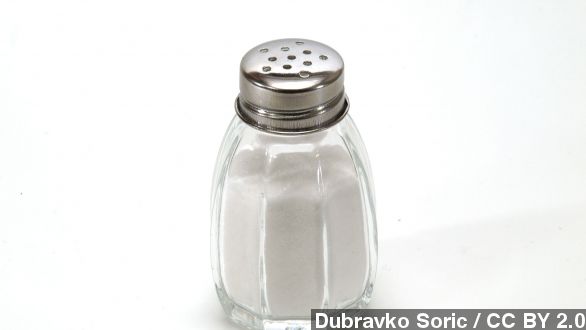 SMS
The Great Salt Debate: Experts Disagree On Ideal Intake
By Amy Kluber
By Amy Kluber
August 14, 2014
A group of researchers in Canada suggests current sodium intake guidelines might be too low, but some experts disagree with those claims.
SHOW TRANSCRIPT

The common belief among health experts is too much salt is bad for your health. But a new report from Canada is shaking up those guidelines, saying that might not necessarily be the case.

Current sodium daily intake guidelines from U.S. government agencies and other health organizations fall between 1,500 and 2,300 milligrams — well under the 3,400-milligram average consumed by Americans every day.

But according to new research, those guidelines might be too low. Researchers working on an ongoing study to observe global nutritional and lifestyle changes say out of the 100,000 people studied, those who consumed fewer than 3,000 milligrams of sodium had a 27 percent increased risk of death or cardiovascular disease.

The researchers say only those with hypertension, the elderly and people who consume more than 5,000 milligrams of sodium per day should worry about reducing their salt intake. (Video via CNN)

Otherwise the researchers warn you should not only avoid too much salt but also too little salt — suggesting the optimum range for sodium intake is between 3,000 and 6,000 milligrams per day. But hear us out before you go grabbing that bag of salty potato chips.

Some experts say the research is flawed and potentially dangerous to worldwide health efforts.

And another study published in the same journal also supports current guidelines and estimates high sodium intake has contributed to about 1 in 10 deaths in 2010.

So why is there so much debate within the scientific community about ideal salt intake levels?

One health expert tells NBC salt might not be the problem. After all, Japan is one of the highest salt consumers yet has one of the longest average life spans in the world.

The recommended limits on salt consumption have been raised before, suggesting salt is not as bad as previously thought.

Sodium does play an essential part in healthy cell function. But although health professionals can't agree on the acceptable levels of sodium intake, it's widely accepted that excessive levels contribute to high blood pressure, which can lead to cardiovascular problems.

And now the U.S. Food and Drug Administration is preparing to release guidelines of its own in an effort to pressure the food industry in the U.S. to reduce excessive salt levels in food.

Perhaps many of us don't even know how much salt we're really consuming. The New York Daily News points out some foods with surprising levels of salt, such as 300 milligrams in two slices of whole wheat bread and more than 1,000 in a ham and cheese sandwich.

Health experts suggest cooking your own food to monitor the salt content and avoiding processed or fast food.

This video contains an image from Dubravko Soric / CC BY 2.0, Robbin Gheesling / CC BY NC ND 2.0.