How Old Is The Grand Canyon? 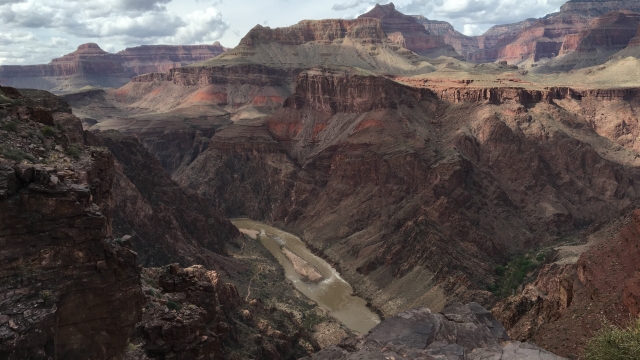 It's hard to pinpoint the Grand Canyon's exact age. Experts think ancient rivers might have carved out parts of it before the Colorado River did.

The national park that encompasses the Grand Canyon has now stood for 100 years. But how old is the canyon itself?

That's harder to answer than you might think because the canyon is not one big monolith. The Colorado River didn't carve it all at once. Parts of it are relatively new — and parts of it are older than the dinosaurs.

As recently as 2010, many scientists agreed the Grand Canyon was all about the same age — some 5-6 million years old. That lines up with when the Colorado River at the bottom of the canyon established its current course. And at the time, scientists thought the river had done most of the work of carving out the canyon.

But a few years ago, geologists went looking for a more detailed history. They divided the Grand Canyon into segments and sampled rocks from the rim and river base in four of them.

They found the segments on either end are about 5-6 million years old, consistent with the expected age of the Colorado River.

But at least two of the segments in the middle are older — maybe as much as 70 million years old. Something has to have carved them, and one leading theory now is that they may have hosted a couple of different ancient rivers before the Colorado came through. One may have even flowed west-to-east because of how different the topography was back then.

That means the Colorado took advantage of the existing low ground to link all of the segments up. Since then, the river has done plenty of its own work: It's dug about 650 feet deeper into the base of the combined canyon structure.

Not Even Federally-Protected Lands Are Safe From Resource Development

New legislative efforts aim to slow down the Trump Administration's plans to open swaths of protected lands to resource development.

By comparison, the now-100-year-old national park has existed for a mere geological eyeblink. And if it lasts long enough, the park may need to expand, too. Thanks to river erosion and general weathering, the Grand Canyon will get deeper — and much wider — as it ages.