The GOP Is Pro-Guns — Just Not At Its Convention 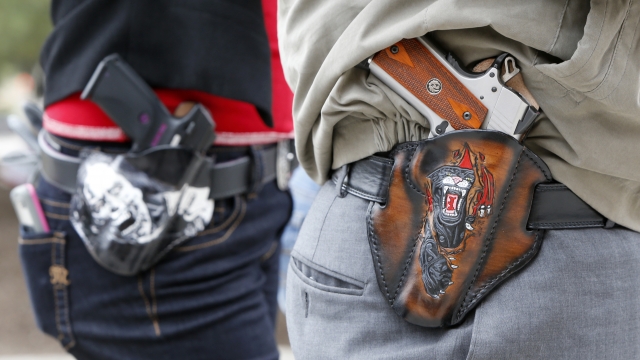 In the gun-control debate, Republicans generally side with pro-Second Amendment causes. But the party has upset some of its constituents because its upcoming convention will likely be gun-free.

As of Monday, more than 44,000 people signed a Change.org petition demanding that people attending the Republican National Convention in Cleveland in July be allowed to bring their firearms.

The petition points out Ohio is an open-carry state and Cleveland is one of the more dangerous cities in America. It encourages GOP leaders to let attendees protect themselves with guns, but the decision may not be up to them.

The site of the convention, Quicken Loans Arena, prohibits all weapons, and some say it's odd that a party known for pro-gun ideologies would choose a site that doesn't allow firearms.

The author of the petition demands RNC Chairman Reince Priebus explain "how a venue so unfriendly to Second Amendment rights was chosen for the Republican Convention."

But the same issue popped up at the last Republican National Convention. In 2012, Secret Service in Tampa Bay said no one except law enforcement could bring guns into the convention.

And in a statement to WEWS late last week, the Secret Service doubled down on that decision, saying it reserved the right to bar firearms from any place visited by individuals under the agency's protection.

Rallies for Republican front-runner Donald Trump have turned violent. If he loses the nomination in a contested convention, Trump himself predicted the situation could get dangerous.

"We're way ahead of everybody. I don't think you can say that we don't get it automatically. I think you'd have riots," Trump said on CNN.

Cleveland police are preparing in case Trump's prediction is accurate. The force is looking to buy 2,000 suits of riot gear for the convention.

This video includes clips from CNN and the Republican National Committee and images from Getty Images.

Correction: A previous version of this video referred to concealed weapons. The petition calls for the open carry of firearms. The video has since been updated.