The GOP 'Establishment' Still Doesn't Have Its Guy 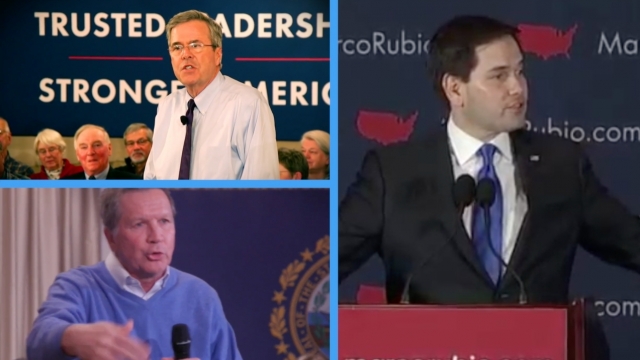 SMS
The GOP 'Establishment' Still Doesn't Have Its Guy
By Kate Grumke
By Kate Grumke
February 10, 2016
With Chris Christie set to drop out, things are getting clearer but are far from set.
SHOW TRANSCRIPT

The so-called "establishment lane" of the GOP race is a mess.

It's down to Jeb Bush, John Kasich and Marco Rubio, but there isn't one clear front-runner. And they're splitting the part of the party that doesn't want Donald Trump or Ted Cruz. (Videos via Kasich for Amerca, Marco Rubio for President, Jeb 2016)

Bush was an early favorite for the establishment spot because his fundraising blew everyone out of the water.

But Rubio pulled ahead in early fall. And in Iowa, Rubio beat the other establishment candidates by a lot, picking up some momentum.

Then this week, Kasich came in second in New Hampshire, which really just confused things even more.

But without one clear establishment front-runner, the three candidates are left to spend their money attacking each other. (Video via Right to Rise)

The New York Times reports rivals have spent the most money attacking Rubio — more than $20 million on attack ads. The vast majority of that was spent by a PAC supporting Bush.

And without a clear establishment front-runner, the three candidates are left to fight amongst themselves.

"You changed your stance on immigration, because you used to support a path to citizenship," Rubio said.

... rather than focusing on these guys.