The Golden Globes Will Be A Hot Mess, And That's Why We Love Them 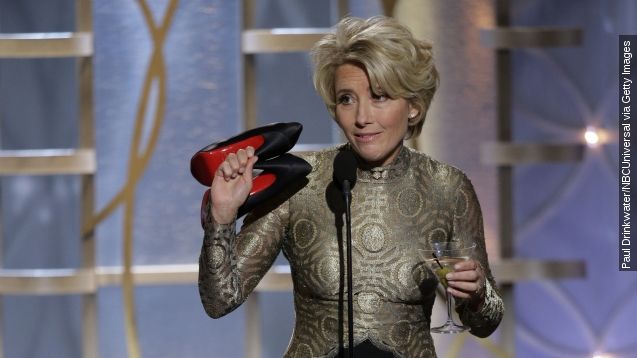 The 73rd Golden Globe Awards are Sunday, and we're expecting (and hoping) it will be a hoot to watch.

"It's gonna be a night of partying and heavy drinking," Ricky Gervais said at the 2011 Golden Globes.

With Gervais returning to host, we can expect jokes at the expense of the celebrities in attendance.

"On a serious note, just looking at all of the faces reminds me of some of the great work that's been done by cosmetic surgeons. You all look great," Gervais said at the 2010 Globes.

"I'm just gonna try to talk Dior into making two of whatever they're making for me," she said.

The Globes are the first major award show of 2016, and we want Leo DiCaprio to start off strong. He's going up against Bryan Cranston, Michael Fassbender, Eddie Redmayne and Will Smith for the award for best actor in a motion picture, drama.

And it'll be "Spotlight"'s time to shine — or maybe not. The film seems to lead the nominees for best picture, and since it's long been thought that this is anyone's game, we'll see if the Boston Globe film really has the power to beat out the other close contenders.

We're also looking forward to the potential for a few drunk moments. Since Moet & Chandon is the Champagne sponsor of the show, that bubbly is flowing all night long — which leads to situations like this:

"My luck is holding. ... I'm in a category where the competition is dead," Harrison Ford said.

The Globes air live Sunday at 8 p.m. ET on NBC.