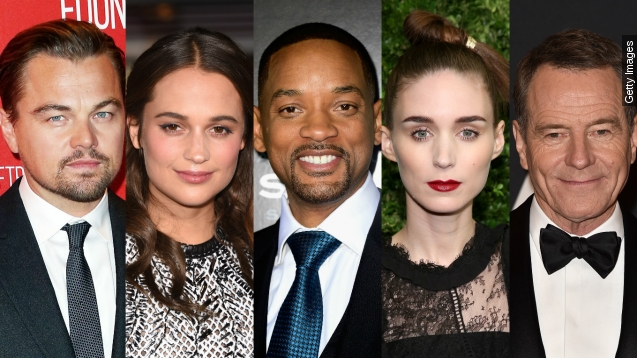 The Golden Globes nominations were announced Thursday morning, and moral of the story here is that if someone was snubbed at Wednesday's SAG Awards nominations, they were honored for the Globes.

On the TV side, the Best Television Series, Musical or Comedy nominees are "Casual," "Mozart," "Orange Is the New Black," "Silicon Valley," "Transparent" and "Veep." Not on that list was newbie "Unbreakable Kimmy Schmidt" — which received a Screen Actors Guild nomination in the equivalent category on Wednesday.

And it's largely a battle of vets in the Best Actress in a Television Series, Musical or Comedy category. Two-time Globe winner and six-time nominee Jamie Lee Curtis will face off against Julia Louis-Dreyfus, who has yet to win despite receiving three nominations in the category for "Veep." (Video via Fox, HBO)

Gina Rodriguez, Lily Tomlin and Rachel Bloom were also nominated. This will be Bloom's first nomination for an individual performance and her first Globe nomination. (Video via The CW)

In film, let's just say none of the nominations were a lock. After all, this awards season has been one for the books.

Best Motion Picture, Drama helps shed some light on the potential Oscar race, but only a little. "Carol," "Mad Max: Fury Road," "The Revenant," "Room" and "Spotlight" all received nominations.

If you're wondering where "The Martian" and "Joy" are in that field, they're over in the comedy category, along with "The Big Short," "Spy" and "Trainwreck."

And speaking of "Joy" and "The Martian," both Matt Damon and Jennifer Lawrence received nods in their respective lead actor categories. They were both snubbed in the SAG Awards nominations.

So was Sylvester Stallone, but he got that nomination Thursday in the Best Supporting Actor category. (Video via Warner Bros. / "Creed")

Best Actress, Drama honored Brie Larson, Saoirse Ronan, Alicia Vikander, Rooney Mara and Cate Blanchett — who will be competing against one another for the same film.