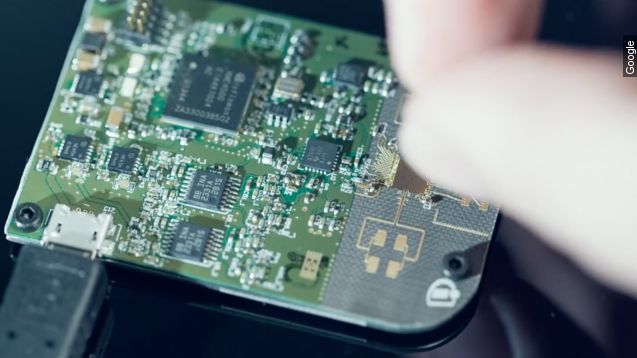 Google is fond of its codenames. The company’s Advanced Technology and Projects, or ATAP, division took the stage at I/O on Friday, to show off a bunch of technology products in various stages of completion.

Think of ATAP as a fast-moving Google-style Skunk Works: a bunch of “Hey, what if we tried this?” ideas that don’t always pan out. (Video via Google)

The Verge writes, “Unlike the rest of Google, ATAP is defined by its deliberate want to create and complete projects in short bursts, or else abandon them.”

It means some of the stuff ATAP showed off at I/O might not make it any farther than I/O. But boy, is it cool.

Some of ATAP’s ideas take advantage of existing technology. Jacquard integrates touch sensors and haptic feedback into fabrics, which could turn clothing into another interactive layer between you and your phone or computer. (Video via Google)

And since it uses the same machinery already common in the textile industry, it has a shot at seeing wider use. Google has partnered with Levi’s to experiment.

Project Soli uses short-range radar to miniaturize gesture recognition. Its chips are small enough to get packed into a smartwatch or phone. (Video via Google)

Instead of actually touching that tiny smartwatch screen, soon you might be able to wave at it instead or command it with any number of hand gestures.

Google reps also talked up some of the ideas that have made it out of that “what-if?” stage, such as Project Loon. The balloon-borne Internet service could float its way to commercial viability by 2016.

It’s also turned the balloons into a network: instead of talking to ground stations individually, each balloon can now link to others to extend the signal. (Video via Google)

And, lastly, a graduate: Project Tango has been an official part of Google ever since it moved out of ATAP in January. It grants phones and tablets precise location awareness in 3D space, for navigation, mapping and augmented reality uses. (Video via Google)

Google wants to grant phones and tablets precise location awareness in 3D space, and make it as ubiquitous as other phone technologies.

And this tech is already for sale, even if it’s aimed at developers. Google released its first Tango tablet for testing through the Play store earlier this week.

This video includes images from Getty Images and I used a nikon / CC BY 2.0.