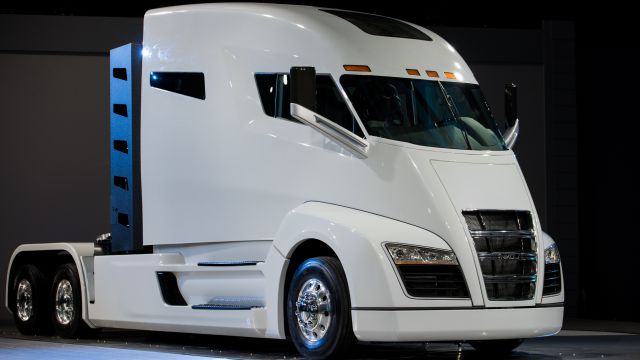 SMS
Electric Is The Future For Semis, Garbage Trucks And Buses
By Micheala Sosby
By Micheala Sosby
February 22, 2017
If all the big and medium-sized vehicles in the U.S. were electric, emissions and fuel consumption would both be cut by more than a quarter.
SHOW TRANSCRIPT

Big and medium-sized trucks make up just 4 percent of traffic on U.S. highways, but they're responsible for a whopping 29 percent of carbon dioxide emissions. So let's imagine the U.S. upgraded all those trucks to zero-emission electrics. Vehicle emissions and fuel consumption would both be slashed by more than a quarter.

We might be close to seeing more environmentally friendly semis, garbage trucks and buses on the road.

Nikola Motor Company has been working on the Nikola One, a zero-emission 18-wheeler that gets a range of up to 1,200 miles. It has a 1,000 horsepower engine, a 15-minute refill time and weighs less than many diesel semis. Construction on its network of more than 300 hydrogen-fuel stations is set to begin in 2018.

Nikola Motor plans to lease the trucks for $5,000-$7,000 per month, and some of the plans include unlimited fuel and free maintenance.

Wrightspeed makes garbage trucks cleaner and quieter. The powertrain company was started by Tesla co-founder Ian Wright, whose specialty is making big electrics more cost-effective. At least 15 Wrightspeed-equipped garbage trucks will be making the rounds in North Bay, California, neighborhoods by the end of this year.

A modern garbage truck typically costs around $500,000, but Wrightspeed says it can retrofit a truck with an electric powertrain for under $200,000. Wrightspeed also promises thousands of dollars in annual fuel and maintenance savings.

Other Tesla veterans went on to start an electric bus company called Proterra, and if you live in Seattle, Chicago or Philly, these will start looking familiar pretty soon.