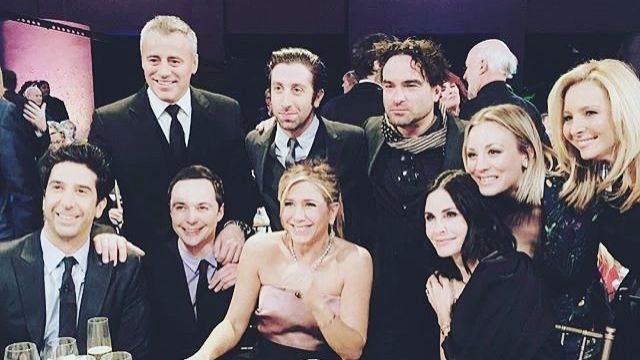 And who can we thank for the pic? None other than superfan Kaley Cuoco, who posed with the famous cast alongside her own cast from "The Big Bang Theory."

Her crying-emoji-riddled caption reflects pretty much everyone's feelings about seeing our favorite New Yorkers reunited for the first time since "Friends" ended in 2004.

The only friend missing was Matthew Perry, who's mid-rehearsal for the upcoming London-based play "The End of Longing."

But it's OK — he'll still make an appearance.

"I'm going to introduce them from here because I'm doing the play here, so I can't be there," he said on "The Graham Norton Show."

Burrows' directing career has included some of TV's biggest shows like "Taxi," "The Bob Newhart Show," "Friends," "Cheers" and "The Big Bang Theory." The special will air Feb. 21 on NBC.

This video includes images from Getty Images and Instagram / kaleycuoco.