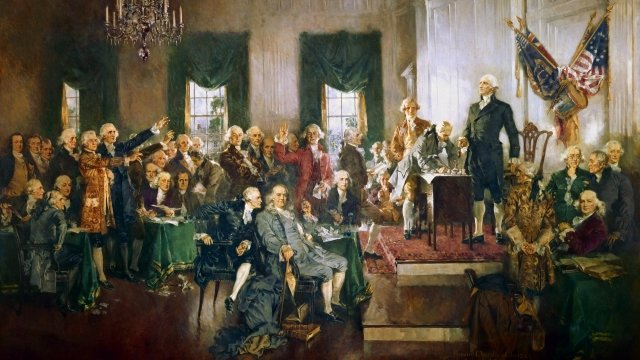 SMS
The Founding Fathers Really Wanted A National University
By Cliff Judy
By Cliff Judy
August 21, 2018
With the United States in its infancy, the founders knew we needed a training ground for future leaders.
SHOW TRANSCRIPT

Even before the Constitutional Convention in 1787, American leaders had tossed around the idea of a national university based in Washington, D.C. for years.

With the United States of America in its infancy, the new country needed a pipeline of future senators, future congressmen, future public servants of all kinds if the "Great American Experiment" of republican democracy was to survive.

American youth were regularly seeking the world's best educational opportunities abroad. It was both an indictment of the limited opportunities at home and worrisome for founders trying to maintain a sense of national pride.

Addressing Congress (pg. 273) in December 1796, President George Washington said, "In a republic, what species of knowledge can be equally important, and what duty more pressing on its legislature, than to patronize a plan for communicating (the science of government) to those who are to be the guardians of the future liberties of the country?"

President George Washington even left land on the Potomac River in his will for the national university, a dream that never materialized for various reasons.

But in this "Ask The Experts," Professor Justin Dyer notes state universities did get off the ground.

"And one of the principal reasons for the first public state universities was precisely this civic education mission," says Dyer, executive director of the Kinder Institute on Constitutional Democracy. "It was that in a regime like ours, we have to have educated citizens who are going to carry on the project in the next generation. ... It's something we really need to think about, 'How do we do this well?'"