The Ferguson Commission Has Its Work Cut Out For It 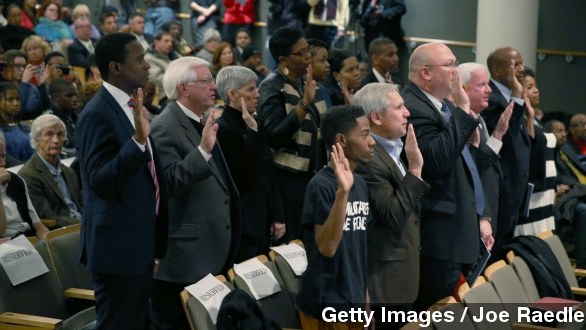 Sixteen St. Louis-area residents have been tasked with bringing healing to Ferguson, and at the moment, it looks like they've got their work cut out for them.

Missouri Governor Jay Nixon announced the members of the Ferguson Commission, a group he said would advise local governments on making the community a fairer place to live when he announced its formation last month.

"This is a defining moment that will determine whether this place will be known as a region marred by racial division and unrest or a region that pulled together to rise above and heal."

The area could use some healing right about now. Ever since news broke that a grand jury could soon announce whether to indict a white police officer for the killing of an unarmed black teen, we've been hearing stories about how tense things are in Ferguson.

Storefronts are boarded up and gun sales are through the roof due to fear of riots and looting if Officer Darren Wilson is not indicted. The FBI warned law enforcement agencies across the country to be on alert, the National Guard is on standby and a state of emergency has been declared. (Video via KTVI, NBC)

But the Ferguson Commission won't be investigating the death of Michael Brown. Instead, the members will try to address the underlying unrest in the community by tackling issues like citizen-law enforcement interaction and access to government services.

It's a long-term project. The commission has almost 10 months to issue its report, meaning it likely won't be much of a factor in what happens after the grand jury decision.

The committee will be co-chaired by two community leaders: Starsky Wilson, pastor of Saint John's Church in St. Louis, and Rich McClure, a local businessman. Both men sit on the boards of several community organizations and are deeply involved in civic issues.

The commission will have access to a $100,000 grant from the Missouri Development Finance Board, though there are few details on how the money will be spent.