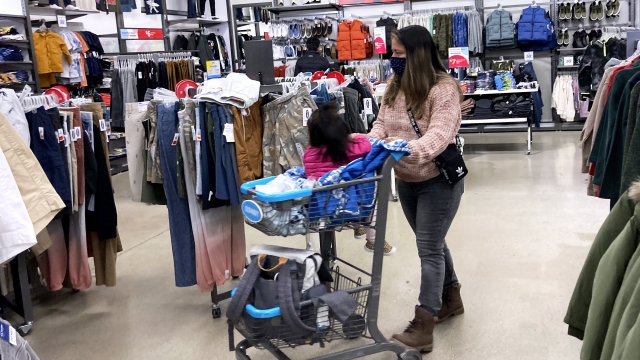 Small businesses and large retail companies alike are trying to find their footing as the pandemic continues to compound problems.

Newsy's Lauren Magarino says in her Chicago neighborhood, "For Lease" signs are plastered over businesses that closed because of the pandemic.

"It's in my neighborhood, too. And it is also a national trend," Nareit senior economist Calvin Schnure said.

Analysts at global bank UBS predict 80,000 U.S. stores will close over the next five years. They cite challenges from before the pandemic that have worsened.

"The pandemic is compounding problems that brick-and-mortar stores were having well before the pandemic, of how do you compete with e-commerce?"

This question is affecting only mom-and-pop shops, but also larger retail companies. That includes Macy's, whose location on Chicago's Magnificent Mile is closed. The space has been temporarily filled with a Dr. Seuss exhibit.

Magarino wondered: Could the bones of brick-and-mortar businesses across the country experience a rebirth? Or would e-commerce titans and a lingering pandemic seal the business model's fate?

"There is a surge of new business formation from midway through the pandemic through now," Schnure said.

Turns out business — specifically retail — is making a comeback.

In fact, the retail trade sector in 2021 had the highest total number of business applications than any other year, according to the U.S. Census Bureau and Nareit analysis.

"The growth of e-commerce does not mean it is pushing out brick-and-mortar retailers, it's just getting a larger slice of a growing pie," Schnure said.

It's a silver lining of sorts demonstrating resiliency during the pandemic.

Dollar stores and auto parts shops are a key driver in new retail openings, and even Amazon is opening a clothing store in a Southern California mall.

But in Magarino's Chicago neighborhood, that resiliency glimmers in pink.

"We were both furloughed during the pandemic right at the beginning and quickly went very stir crazy," Zyburt said. "So we actually decided to take on the project, something that we had both been kind of vaguely interested in, which was the process of roasting coffee."

In September of 2020, they launched their online store selling bags of coffee beans.

"We had a great holiday season in the e-commerce space," Zyburt said.

The season was so successful, they decided to open a storefront — filling a retail space that had been vacant for nearly a year.

"We went through several potential addresses before we landed on 2945," Zyburt continued. "I don't think either of us could have ever been ready for specifically the outpouring of support from this neighborhood."

The shop is Instagram-worthy, from the assuring messages to the coffee itself, which may be behind some of its success.

You just have to look for them, because for every "Help Wanted" and "For Lease" sign Magarino saw, there were signs of potential recovery saying "Coming Soon."