The Fastest Films To $1 Billion, In 1 Chart 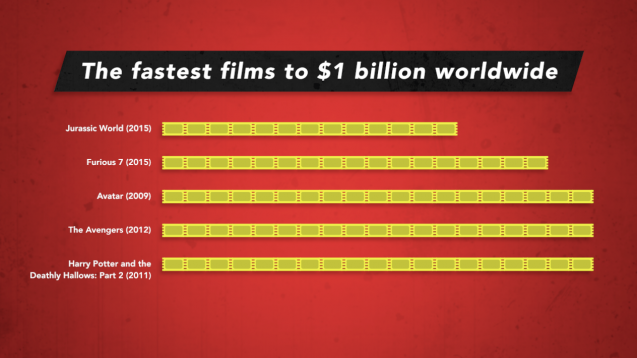 SMS
The Fastest Films To $1 Billion, In 1 Chart

By Zach Toombs
July 1, 2015
Two record-breaking movies have hit the $1 billion mark this year. We rounded up the films that have hit that mark the fastest.
SHOW TRANSCRIPT

In honor of the new box office king, we're counting down the fastest films to $1 billion.

First up, the boy wizard's last time on the big screen. "Harry Potter and the Deathly Hallows: Part 2" eventually took in a magical $1.3 billion worldwide. And it only took 19 days to hit the $1 billion mark. That's like golden snitch fast.

Next, the film you all knew would be on this list. In 2012, "The Avengers" matched "Harry Potter"'s record, also reaching $1 billion in 19 days.

James Cameron's "Avatar" set all sorts of records in 2009, including the largest worldwide total of all time, which still stands. And at the time, it set the landspeed record for making a billion bucks at the movies.

But eventually, those three films tied. Here's where it gets interesting.

Earlier this year, nobody saw this big release coming from the seventh "Fast and Furious" film. It lived up to its name, passing that $1 billion benchmark in just 17 days. But it couldn't compete with No. 1.

Giant dinos? So many checks.

And it really blew away the record books, hitting the big number in just 13 days, which makes it the fastest film to $1 billion.

This video includes music from Revolution Void / CC BY NC 3.0.