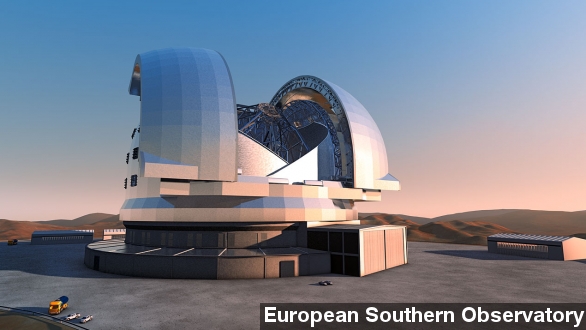 By Matt Picht
April 20, 2014
Scientists are preparing to blow up a Chilean mountain to construct the Extremely Large Telescope, which will take detailed pictures of exoplanets.
SHOW TRANSCRIPT

Engineers in Chile are planning to blow up a mountain top in the name of science.

Crews are preparing to demolish the top of Chile's Cerro Armazones mountain to make way for the world's biggest telescope: the E-ELT, or the European Extremely Large Telescope. Yes, that really is the official name. (Via Deep Sky Videos)

The E-ELT is going up just 12 miles down the road from the Cerro Paranal mountain, which hosts an observatory of four VLTs — or Very Large Telescopes — which have made several important discoveries, including the supermassive black hole which sits at the center of our galaxy. (Via Nowness)

But now the European Southern Observatory, the group behind the Paranal observatory, is setting its sights on a much bigger project. The Extremely Large Telescope's central mirror will be a staggering 39.3 meters in diameter, allowing it to take images 15 times as sharp as the Hubble telescope.

But why do astronomers need such a big telescope anyway? In a word: exoplanets.

Among the new capabilities the E-ELT will offer astronomers is the ability to take high-resolution photographs of planets outside of our solar system. Several of these exoplanets, like the recently discovered Kepler-186f, could potentially host some form of life. (Via NASA)

As one scientist told The Guardian, "In 15 years, we should have a picture of a planet around another star and that picture could show its surface changing colour just as Earth does as the seasons change – indicating that vegetation exists on that world. We will then have found alien life."

Demolition work on the Cerro Armazones begins June 16. The finished telescope is set to go into operation by 2025.