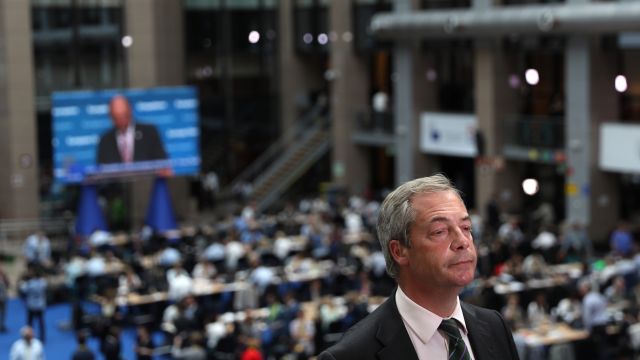 Nigel Farage, one of the main architects of the U.K.'s exit from the European Union, also happens to be a member of the European Parliament.

So when he showed up in the European Parliament for a special session, things got kind of heated.

Farage said, "I know that virtually none of you have ever done a proper job in your lives."

Farage laid into the assembled MEPs, saying the EU's ambitions for a united Europe had failed miserably. He said, "By stealth, by deception, without ever telling the truth to the British or the rest of the peoples of Europe, you imposed upon them a political union."

And he got an assist from France's far-right politician Marine Le Pen, who's campaigning for a similar referendum on EU membership in her country. She called Brexit "a signal of freedom sent to the entire world."

But the pro-EU wing of Parliament wasn't having it, accusing Farage of using misleading and xenophobic claims to persuade the U.K. to vote out.

Manfred Weber, of the European People's Party, said, "I ask Mr. Farage: If you had an ounce of decency in you, you would apologize to the British. Shame on you."

"The posters of Mr. Farage showing refugees like in Nazi propaganda. ... I never thought it was possible that somebody in this house should do a thing like that," said Guy Verhofstadt of the Alliance of Liberals and Democrats for Europe.

One thing Farage and the rest of Parliament have in common: a desire to get this over with. Farage told Parliament the will of the British people must be carried out as soon as possible.

And European Commission President Jean-Claude Juncker seems eager to see the backs of the Brexiters.

He said: "You are fighting for the exit, the British people voted for the exit. Why are you here?"