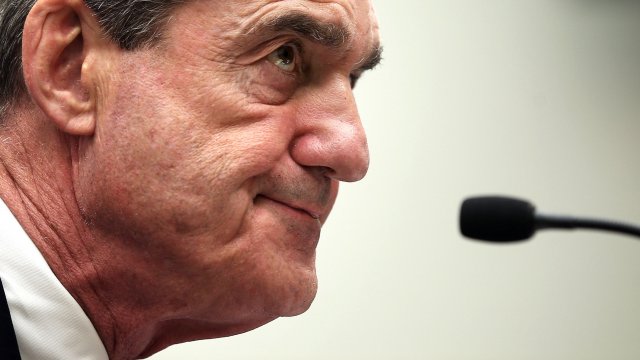 SMS
The End Of The Mueller Probe May Be The Beginning Of A Legal Fight
By Alexandra Miller
By Alexandra Miller
March 22, 2019
Special Counsel Robert Mueller is expected to finish his nearly two year investigation in the coming weeks. What happens next may disappoint many.
SHOW TRANSCRIPT

Special Counsel Robert Mueller has wrapped up his investigation. But closing the book on the Trump's campaign possible collusion with Russia could open up a whole new can of worms. That's because we don't know how much, or how little, we'll find out about this nearly two year investigation.

According to special counsel regulations, the report should be "confidential." Mueller handed over his report to Attorney General Bill Barr Friday afternoon. Barr confirmed the receipt of the report in this letter. Now, he'll read the report and put out a statement on the findings. But it's unclear what that statement will look like.

The regulations specifically say: "The Attorney General may determine that public release of these reports would be in the public interest" but that he is only required to notify the chairman and ranking minority member of the judiciary committees with an "explanation" at the conclusion of the investigation.

Barr could choose to release the entire report, or none of it. He could could release a detailed summary, or just confirm he received it. Barr is really only required to confirm he's received the report and let Congress know if at any point during the investigation the Department of Justice prevented Mueller from pursuing leads or denied him funding.

The only thing Barr has promised: "as much transparency as there can be, consistent with the rules and the law." Translation: no promises to give any concrete detail.

Barr's actions on this will dictate the course of political battles likely through the next election. If he declines to send Congress the report, they’ll probably subpoena it. A lawsuit to get the information could make it all the way to the Supreme Court.

Mueller could also release his own report but he's given no indication he plans to do so. But Democrats might be able to compel Muller to give his account of the probe, either by calling him to testify, or passing legislation to require him to provide Congress with a summary.

And even if Mueller's work ends with the report he sends to Barr, the investigation might live on. Other U.S. Attorney's offices in New York, Virginia and Washington D.C. have worked with the special counsel's office and might be prepping to file their own charges within their jurisdiction.