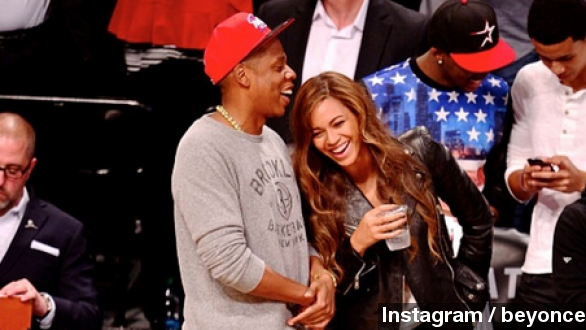 SMS
The Elevator Incident: Will Jay-Z And Beyonce Comment?

By Lauren Zima
May 13, 2014
Video of Beyoncé's sister seemingly hitting Jay-Z went viral in just one day. With the story all over, will the A-listers speak out?
SHOW TRANSCRIPT

The video, which has no sound, was first posted by TMZ. Twenty-seven-year-old Solange appears to violently attack 44-year-old Jay-Z after the Met Gala last week. It was picked up by media everywhere — and got the speculative #WhatJayZSaidToSolange trending on Twitter into Tuesday morning.

Media are speculating too, and that's pretty much all they can do. So far, the situation seems to be on lockdown — just like it was when a man who appeared to be a bodyguard pushed the emergency stop button during the argument.

Us Weekly claims to have "new" and "exclusive" details about the incident, but the outlet has zero information on what the fight was about or any potential issues the family's been having.

CNN reached out to reps for the three stars but got nothing.

Beyoncé and Jay-Z did make headlines again Monday night for attending a Brooklyn Nets playoff game amidst the drama, with outlets like The Huffington Post summarizing that the pair was putting on a "united front."

But again, silence. The New York Daily News said its reporter approached the rapper at the game but was ushered away by a security guard.

Bey and Jay usually take the approach of making their own statements as opposed to interacting with the media.

Beyoncé's hit self-titled album was released as a surprise because she didn't want media to dictate reaction to it beforehand. (Via Parkwood Entertainment / Columbia Records / Beyoncé)

She also consistently posts photos on her own social media accounts and videos to YouTube to interact with fans. (Via Instagram / beyonce)

So, it seems likely that if the pair does address the striking situation, it will be on their own terms, not in response to a reporter's question or a call for comment.

Until then, unnamed "sources" are the only go-to. Hollywood Life quotes an "insider" on the reason for the attack: "Solange doesn't like the way Jay Z controls Beyonce ... Beyonce would never speak up to him or defend herself, so Solange does it."

Not sure we believe that coming from one of the most outspoken feminists of our time. (Via YouTube / Lean In)

The Standard Hotel, from which the footage was taken, has released a statement saying it is "shocked and disappointed" by this breach of security. So far, social media silence from Jay-Z, Beyoncé and Solange.