The DOJ's 'Searing' Report On Ferguson: Worse Than Expected 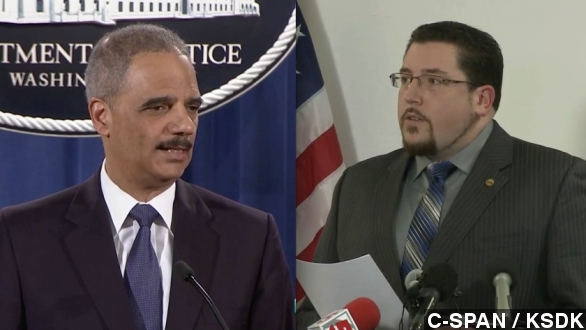 SMS
The DOJ's 'Searing' Report On Ferguson: Worse Than Expected
By Jamal Andress
By Jamal Andress
March 4, 2015
The report describes everything from harassment to excessive use of force to the unfair targeting of African Americans for ticketing revenue.
SHOW TRANSCRIPT

The Department of Justice's report on the Ferguson Police Department was released Wednesday, and it turns out to be even more damning than the early leaks suggested. The report describes everything from harassment to excessive use of force to the unfair targeting of African Americans just to help balance the city's budget.

Attorney General Eric Holder said, "African Americans made up over 90% of the those charged with a highly discretionary offense described as, 'manner of walking along roadway.'"

He continued, "Our review of the evidence found no alternative explanation for the disproportionate impact on African Americans other than explicit or implicit racial bias, no other basis. ... Some of those protestors were right."

"This report allows the city of Ferguson to identify the problems not only in our police department but in the entire St Louis region."

Wednesday, Ferguson Mayor James Knowles didn't offer much in the way of a response to the accusations, and he didn't take questions.

The report cites example after example of Ferguson police breaking the law and demonstrating racial bias in their policing. Here are some of the DOJ's statistics:

When Ferguson police used force, 88% of the time the suspect was black. Black people made up 93 percent of arrests and 90 percent of the citations made by the Ferguson PD. The black population in the city is just 67 percent.

The report also revealed racist emails from Ferguson PD supervisors. One email compared the President Obama to a chimp. Another placed the words, "Michelle Obama’s High School Reunion" over a picture of bare chested African women dancing. Another claimed a man was seeking welfare for his dogs because they are "mixed in color, unemployed, lazy, can't speak English and have no friggin clue who their daddies are."

This is one of several scathing Department of Justice reports on police departments across the country.

Just this past year, the DOJ has released alarming reports on the Cleveland and Albuquerque Police Departments, outlining systemic problems and excessive use of force. It was a Cleveland Police Officer who shot and killed 12-year-old Tamir Rice back in November while the boy was holding a toy gun.

Monday, the Obama administration's Task Force on 21st Century Policing released an interim report with many suggestions for how to tackle problems in policing across the country.

Some of those suggestions include bringing on independent prosecutors to investigate deadly police shootings, increasing community involvement and keeping data on the use of deadly force by police officers. (Video via ABC)