The DOJ Might Be Using Planes As Fake Cell Towers 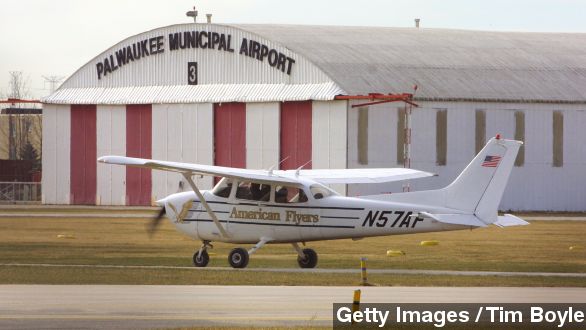 SMS
The DOJ Might Be Using Planes As Fake Cell Towers
By Evan Thomas
By Evan Thomas
November 14, 2014
The airborne program is said to collect incidental data from any cell phones that connect to its fake cell tower signals.
SHOW TRANSCRIPT

A program intended to spot criminal activity is said to also capture innocent Americans’ communications — and this time, the surveillance is airborne.

According to a Thursday report in The Wall Street Journal, the Department of Justice has been operating a collection of Cessna aircraft like this one out of airports across the country since 2007.

The planes carry boxes which identify themselves as cellular towers to phones, and extract identification and location information.

The devices come from a Boeing division called Digital Receiver Technology. Thanks to their initials — DRT — they’re known colloquially as “dirtboxes.”

The Verge writes “The attack plays [off] a basic vulnerability of cell phones: they're designed to connect to the closest available signal, regardless of how trustworthy it is.”

Manufacturers and cell carriers don’t have any way to prevent this sort of interception — a notion that has rights advocates worried.

A staff attorney with the Electronic Frontier Foundation told Gizmodo "There are some serious and troubling legal questions about this program. This is very different from the government getting this information from a phone company.”

And speaking with Ars Technica, an attorney for the American Civil Liberties Union worries the practice is overly broad. It “goes to the question of whether the search is reasonable under the Fourth Amendment,” which protects against unreasonable search and seizure.

The dirtboxes are drawing immediate media comparisons to the Stingray and devices like it — ground-based equipment that can track and intercept cell phone data the same way.

Those devices, too, occupy somewhat murky areas under the Fourth Amendment. Law Enforcement agencies and the Justice Department maintain the gadgets are legal, while at the same time fighting the ACLU to keep from disclosing their use. (Video via KPIX)

The Justice Department has so far declined to comment on The Wall Street Journal’s most recent report.