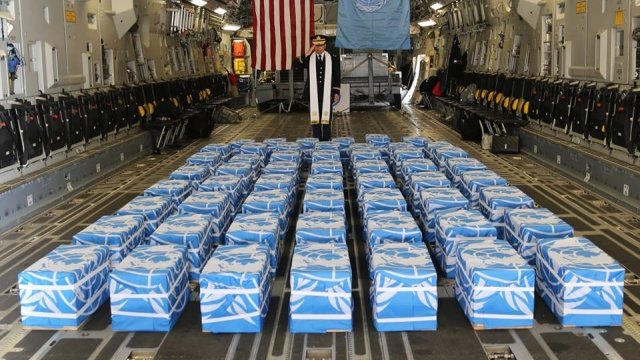 SMS
The Difficult, Delicate Work Of Identifying Fallen Korean War Soldiers
By Lindsey Theis
By Lindsey Theis
July 27, 2018
The task of identifying the remains of U.S. soldiers returned from North Korea could include evidence from dental X-rays and family members' DNA.
SHOW TRANSCRIPT

Decades after their deaths, 55 cases with the remains of U.S. soldiers who fought in the Korean War are on their way home. Now comes the task of identifying them.

The remains are bound for the Defense POW/MIA Accounting Agency, the largest forensic anthropology lab in the world. Scientists there analyze remains of missing service members from World War II, Korea and Vietnam.

To do this, genealogists rely on the family members of the fallen. They gather evidence from dental X-rays and a soldier's family tree. They analyze material evidence like military uniforms, belongings or ID tags that may be among the remains. They also search for DNA samples. 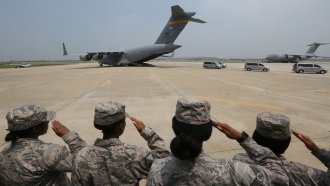 In 75 percent of their cases, the DPAA uses mitochondrial DNA, which can be found in teeth or bones. This DNA is maternally inherited, meaning a soldier's mother, siblings and any other maternally-related family members have identical sequences. If genealogists can match DNA to a living person, they'll know the have the right family.

But the work will still be challenging. It's likely some of the cases contain more than one service member's remains. DNA may also have deteriorated over time or from environment. And the Defense Department says most Korean War soldiers don't have DNA records.

Experts say the process will be long and careful. Even with the combinations of evidence from DNA, dental records and other sources, identifying all of the soldiers could take months or even years.

Meanwhile, more than 7,000 American Korean War military service members are still unaccounted for. The DPAA believes about 5,300 are in North Korea.