Pro Football Is Just A Bit Quirkier In Canada 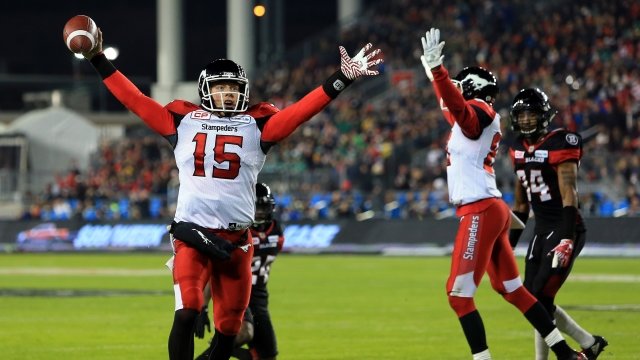 SMS
Pro Football Is Just A Bit Quirkier In Canada
By Carter Woodiel
By Carter Woodiel
October 19, 2017
From a 55-yard line to a play that scores one point, football is a little weirder north of the border.
SHOW TRANSCRIPT

The Canadian Football League: It's like the NFL's quirky cousin.

Football north of the border has a few differences from the game we see here in the States — and some of them can get pretty weird. Let's take a look.

The biggest difference in Canadian football is the number of downs: There are three instead of four.

This means offenses typically have only two plays to get a first down before they punt the ball away or try for a field goal, which is a big deal strategy-wise.

But luckily for those offenses, another rule difference makes their lives a little easier: The playing field is bigger.

The CFL playing field is 65 yards wide, whereas in the NFL it's just over 53 yards. And the end zones are twice as long as they are in the NFL.

The rest of the field is longer, too. CFL fields are 110 yards from goal line to goal line, which means there are two 50-yard lines on the field and a 55-yard line in between them.

But the crown jewel of CFL quirkiness, at least to some, is an unusual scoring play called "the rouge."

If a punt or missed field goal crosses the goal line, the defending team has to get the ball out of its end zone. Otherwise, the kicking team gets a single point, or rouge.

This is important because in Canada the goalposts are right at the goal line, not at the back of the end zone.

That means a team can get a point after missing a field goal.

It probably seems pretty weird to Americans for a football team to get a single point on a play without having just scored a touchdown. That's because it's pretty much impossible to do in an NFL game.

There are other things that distinguish the Canadian game as well, but at the end of the day the two brands of football are far more similar than they are different. Even if the NFL doesn't have any French in its rulebook.