The Department Of Justice Continues Its Investigation Into Trump 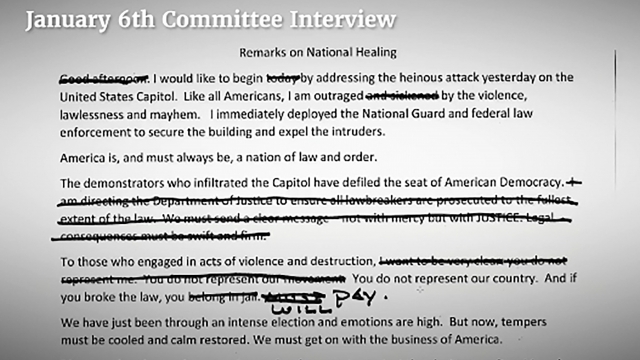 It's been four months since a federal judge said former President Donald Trump "more likely than not" committed a crime attempting to obstruct Congress' certification of the 2020 elections.

Now, the Department of Justice is reportedly investigating Trump's actions as part of a criminal probe into a fraudulent scheme to build slates of fake electors that would overturn President Joe Biden's win.

"We intend to hold everyone, anyone, who was criminally responsible for the events surrounding January 6, for any attempt to interfere with the lawful transfer of power from one administration to another, accountable," said U.S. Attorney General, Merrick Garland.

At least two top aides to former Vice President Mike Pence have reportedly testified before a federal grand jury, at least partially, about conversations they had with Trump after he lost the election. That investigation has been running in parallel with the House Select Committee.

Aides, including the president's own daughter, testified the president had heated conversations with Pence ahead of January 6, when the vote count was certified. But the conversations weren't just private. Trump publicly pushed for Pence to decertify the election.

"All Vice President Pence has to do is send it back to the states to recertify and we become president and you are the happiest people. We have come to demand that Congress do the right thing and only count the electors who have been lawfully slated, lawfully slated," Trump said.

The alleged scheme would have allowed Pence to choose those "alternate slates" in the seven states President Biden won, giving Trump an electoral victory and keeping him in office.

The question now is: did Trump himself help in the conspiracy?

In at least one memo in late December 2020, The Washington Post reports, Trump's attorney John Eastman told Georgia lawmakers to "adopt a slate of electors yourself."

The Post also says Trump campaign officials told these fake alternate electors to operate in secrecy, including by lying to security officials about why they were in the State Capitol.

In a deposition with the House Committee, Republican National Committee Chairwoman Ronna McDaniel connected the former president to this scheme.

"Ms. McDaniel testified that during a call with Mr. Trump, he put Mr. Eastman on the phone with her "to talk about the importance of the R.N.C. helping the campaign gather these contingent electors," Ronna said.