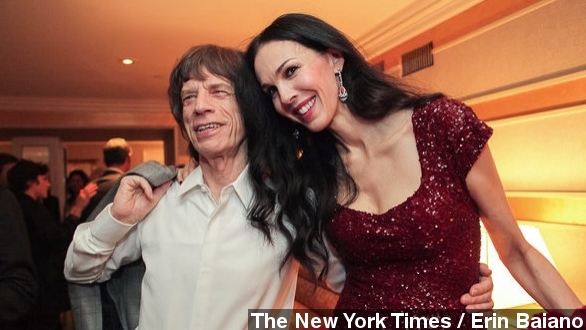 Fashion designer L'Wren Scott might have dressed the likes of Madonna, first lady Michelle Obama, Angelina Jolie and more. But in reporting her death Monday, major media outlets dubbed her something other than a fashion designer.

The Los Angeles Times left her nameless, too.

So how could a woman so powerful in her profession — she'd modeled for the likes of Chanel, she'd shown at New York and London fashion weeks, she'd built her own brand — how could she be whittled down to "rock star's girlfriend"? (Via The Financial Times)

A writer for Flavorwire called the dumbing down "singularly depressing."

"A five-second Google search was enough to tell me that she was obviously a well-respected designer and stylist. And even if she wasn't, she's still worth referring to as, y'know, a person, not as an adjunct to the life of her boyfriend, however famous he may be."

Still, it's not all media — fans, members of the fashion world and several reporters spoke out against the summarizing. (Via Twitter)

Boston.com's Stylephile offers a logical, if icy, reason behind the headlines: "The easy and cheap reason for it: SEO and name recognition. Mick Jagger paired with the term 'suicide' is one hell of a combo."

And some outlets have since changed their tunes — the LA Times is now running a piece declaring "L'Wren Scott was not just Mick Jagger's girlfriend."

Scott and the Rolling Stones frontman had been together since 2001. His impact on her life is undeniable, as was her impact on his.

Jagger's spokesperson told ABC he is "devastated by the news."

Ultimately, it's a tragic day for the fashion world — and luckily, several eulogies are doing Scott's career justice. If you're looking for substance, we recommend this piece in The Telegraph and this one by Women's Wear Daily.