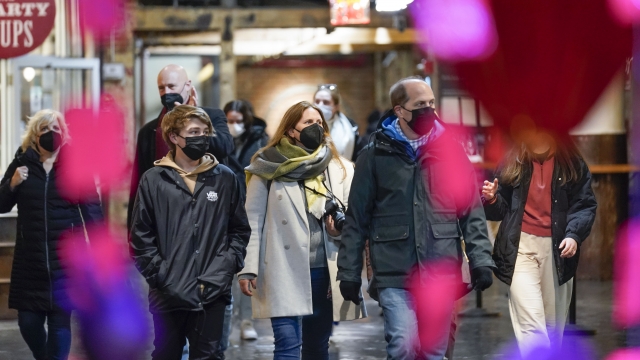 SMS
Inflation Hits 40-Year High Despite Wage Increases, Job Market Growth
By Isbella Diaz
By Isbella Diaz
March 10, 2022
Wages are up and so are jobs. But on the flip side, we're paying more for everything from groceries to gas.

It is the No. 1 concern for Americans: The economy. And the highest rate of inflation in 40 years. The painful reality is dragging down the president's poll numbers.

All the while, there's been one persistent message: Things will get better with time.

"Folks, America is coming back," President Biden said. "It really is."

But the U.S. economy is full of contradictions.

Here's where things stand: Wages are up and so are jobs.

U.S. businesses posted 11 million jobs in January alone. The unemployment rate hit its lowest level since the start of the pandemic just last month. And this year began with wages rising at their fastest pace in 20 years.

But on the flip side, we're paying more for everything from groceries to gas.

The rate of inflation just hit another record — nearly 8% in February — driven by food, rent and gas. The national average is $4.31 a gallon, according to AAA, a record high and rising by the day.

"Transportation costs will go up so it will cost more to transport goods from one state to another, one place to another so that will be reflected in higher prices," Marquette University Professor Abdur Chowdhury said.

That translates into businesses, passing on costs to customers from everything from food to tech.

Russia's invasion of Ukraine made everything worse, throwing global energy markets into turmoil.

One bipartisan solution is to create millions of new factory jobs. That could help lower everyday costs on consumers.

"What you really need to do is raise the production in America, so that would lower the price, it would lower inflation, more Americans would be working, America would be stronger," said House Minority Leader Kevin McCarthy.

Still, economists say it's not that simple.

"I mean, a lot of it depends on what happens in the war, and honestly, I wish I was more optimistic," said Brookings Institution Fellow Samantha Gross.

And with Americans' budgets getting tighter, frustration is rising.