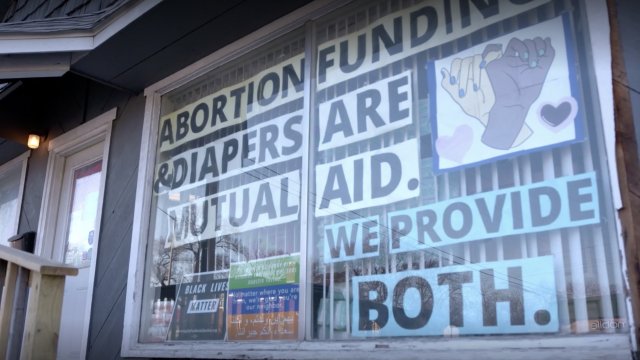 SMS
The Confusion Surrounding Pregnancy Centers And Abortion Services
By Amber Strong
By Amber Strong
January 19, 2022
There is growing controversy about the confusing advertising of clinics that offer abortion options and crisis pregnancy centers, which do not.

“With a lot of parents using public transportation we want to make it really easy for them to carry, if possible,“ Marchbank said.

The night before, her group, All-Options Pregnancy Resource Center, handed out diapers to more than 40 parents. She says in December they distributed more than 12,000 diapers and around 160 packages of wipes.

The team says they work to live up to their name, providing all options to clients, and sometimes that includes funding an abortion.

"They need a pregnancy test, a dental dam and condoms, and we buy these by the hundred," Marchbank said.

She jokingly calls her group the anti-crisis pregnancy center.

“We've had people come in assuming that we were another crisis pregnancy center and they'll say, 'Oh, sure, every pregnancy resource center says that abortion is OK, but most of them don't actually mean that.' And I say, 'Well, we do actually mean it.'"

When faced with an unplanned pregnancy and not sure where to turn, one may start their search online, where it can be hard to tell which clinics do or don't perform or refer patients for abortions.

And the similarities in advertising between those who do provide abortion resources and the crisis pregnancy centers who don’t have abortion rights groups crying foul.

“Not only do they not support abortion rights, they're actively opposed to accessing abortion," said Elizabeth Nash, principal policy associate at Guttmacher Institute.

Crisis pregnancy centers, or CPCs, were created in the 1960s as the debate over abortion laws accelerated.

While many offer medical advice and appear to be clinics, the team of researchers and lawyers at The Alliance say only 16% actually employ a licensed physician.

“They try to become medical, but they don't really get that very far down that path, in part because it would have to be regulated," Nash said.

Their main offers are over-the-counter pregnancy tests, non-medical ultrasounds, and goods like diapers, which are typically obtained after completing courses such as Bible studies.

They have been documented as purposely misleading clientele and lying about gestation dates to delay abortions.

According to The Alliance, since their inception they now outnumber abortion clinics 3 to 1.

That statistic is good news for people like Hunsberger, who says she’s dedicated her career to the movement.

“I always say I have the world's shortest resume," Hunsberger said. "I've always been at Women's Care Center.”

As vice president of the nationwide CPC Women's Care Center, she says their mission is to be upfront with women about their anti-abortion stance.

“We list the services that we do provide and that we don't provide on our website and it's on every page of our website," Hunsberger said.

She says their clients are thankful for the supportive ear and free goods and services, like the breastfeeding equipment and clothing they earn through their “crib club” which rewards parents after completing parenting courses, which she insists don’t have religious undertones.

Hunsberger won’t comment on whether some CPCs are practicing in bad faith.

“Women are very smart," she said. "They know who we are, they know what we do and they choose to come to us because they know the care that we provide.”

By their own admission, the large majority of people visiting CPCs already planned to proceed with their pregnancies are actually there for the goods and services.

“It is full service," Marchbank said. "We try to meet as many of their needs as we can.”

Marchbank admits she has referred clients who aren’t pregnant to CPCs when she runs out of an item.

“I have clients who come here and they go to the other two centers because people need resources, and I don't begrudge them that at all," Marchbank said.

Still, she says at her place people will never have to earn the things they need, be it emotional support or a pack of wipes.