Explaining The Conflict Between Turkey, Syrian Kurds And The U.S. 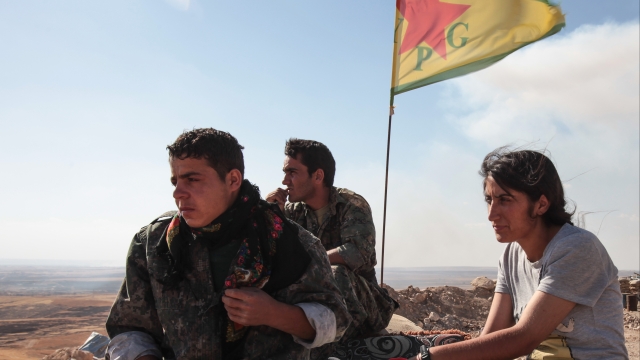 The political and military conflicts in the Middle East are extremely complicated, and Syria is no exception. A change in U.S. policy on Sunday increased tension in country's northeast region, so let's look at the three key players and what each group wants.

Northeastern Syria is largely controlled by the Syrian Democratic Forces, a loosely organized group of mostly Kurdish people. In the country's civil war, the Kurds are an ethnic group fighting for autonomy. They want the ability to govern themselves, but they're not trying to gain independence from Syria. In the fight against ISIS, the SDF was a key U.S. ally that helped push the terrorist group out of the region.

Turkey borders Syria to the north, and it views the Kurdish forces as a terrorist group. Turkish President Recep Tayyip Erdoğan wants to take over some of the area the Kurds control to create a "safe zone" along the border east of the Euphrates river. Turkey has taken in millions of Syrian refugees, and Erdoğan says he wants to use that "safe zone" to help return 1 million of them to their home country.

U.S. troops have been in Syria mostly to fight ISIS. To do so, the Americans partnered up with the Kurdish forces there. But Turkey is also a key American ally in the Middle East. The Trump administration's decision to withdraw troops from the contested border area is effectively like bowing out of the conflict. Instead of taking sides, the U.S. is opting to let the Syrian Kurds and Turkish forces battle each other directly.

President Donald Trump said his decision to leave the region is a step away from "endless wars." Opponents say the U.S. is abandoning its Kurdish allies and leaving them to die.