The Clinton Foundation Is A Conflicts-Of-Interest Machine 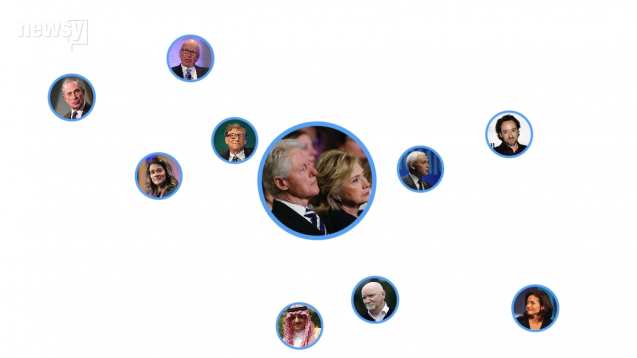 The Clintons bring wealthy, famous people into their fold to help solve global problems. But those donors sometimes get something in return.

The Clinton Foundation is a charity. But on a certain level, it operates more like a club. A club that brings wealthy, famous people into the Clinton orbit in hopes of solving some of the world’s biggest problems, like climate change and poverty. But those wealthy people often get something in return — and that’s where the Clintons are running into trouble.

One of the clearest examples of this involves a man named Frank Giustra, a Canadian magnate with money from both filmmaking and mining.

Giustra has given a lot to the Clinton Foundation — $100 million in the last decade. And an in-depth report from The Washington Post showed Bill Clinton himself has borrowed Giustra’s private jet 26 times since 2005, with the two men traveling together on half those trips.

Clinton typically traveled for charitable causes. But Giustra traveled for business — and his traveling buddy gave him *a lot* of access. On one such trip, the two dined in Kazakhstan with the nation’s president. Days later, Giustra closed a huge deal to buy uranium mines in the country. Something similar happened when he and Clinton visited Colombia.

And in many cases, such business deals from Clinton Foundation donors came to the Clinton-led State Department for approval. Like when the State Department approved a deal to let Boeing and other U.S. contractors supply $29 billion worth of weapons to Saudi Arabia. Years before, Saudi Arabia had given $10 million to the Clinton Foundation. And months before the deal, Boeing donated $900,000. That, from a report by International Business Times.

In no case was there evidence of corruption by the Clintons, just conflicts of interest — a lot of them. And that orbit that includes movie stars, millionaires and foreign leaders has only kept growing — for better and for worse.