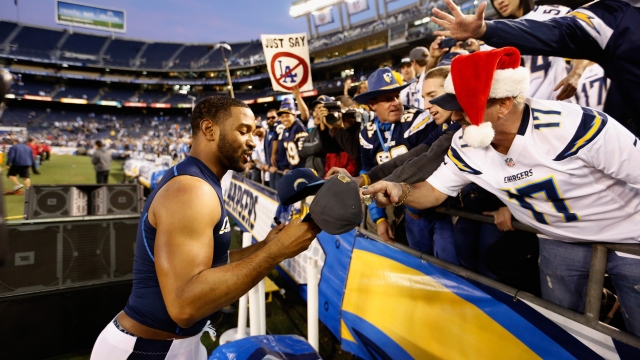 SMS
The Chargers Take Their First Big Step Toward Staying In San Diego
By Carter Woodiel
By Carter Woodiel
April 24, 2016
The San Diego Chargers held a rally to kick off a new stadium plan Saturday, but there's still a long road ahead to keep the team from bolting to LA.
SHOW TRANSCRIPT

If the Chargers want to stay in San Diego after this year, they're going to need a new stadium.

And on Saturday, they took a major step toward getting one.

"We'll have a new home for the Chargers, and a perfect place for the Super Bowl," NFL Commissioner Roger Goodell said at a rally Saturday.

Goodell was at a rally kicking off a campaign for a brand-new downtown stadium and convention center. The rally drew over 4,000 Chargers fans.

They were there to sign a petition to increase the city's hotel tax. The tax would reportedly generate $350 million, or roughly one-fifth of the stadium's $1.8 billion budget.

There's still a lot of work to do from here though. The Bolts would need to get roughly 67,000 names on their petition by mid-June to guarantee a spot on the ballot in November.

Getting a new stadium is vital if the Chargers want to stay where they are. The team has the option to move to Los Angeles next season, and the NFL has made it clear it isn't a fan of Qualcomm Stadium, where the Chargers play now.

Of course, not everyone thinks public money would be worth it. The Chargers say the stadium would boost the area's economy, but claims like that have been overblown in the past.

As for where the city government stands, San Diego's mayor says he's happy a concrete plan for the stadium is now in place but says he's ready to negotiate terms.

"You sit down, and you start hashing things out," Mayor Kevin Faulconer said in an interview with a local Fox Sports affiliate. "There's going to be some things that I think make sense probably right away; there may be some sticking points, but that's what negotiations are all about."

In any case, Chargers fans are probably happy the league seems to be on their side. Goodell was definitive in his support for the new stadium plan.

"The Chargers do belong here in San Diego, you're right." Goodell said at the rally.

That's the kind of certainty that probably makes fans of the St. Louis Rams — er, sorry, the Los Angeles Rams — a little jealous.