The Chair J.K. Rowling Sat In To Write 'Harry Potter' Sells For $394K 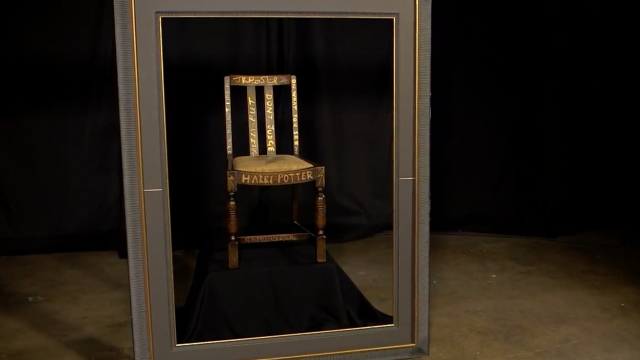 The chair J.K. Rowling sat in while writing the first and second "Harry Potter" books just sold at auction Wednesday for $394,000 –– and someone even painted all over it beforehand.

That someone was actually Rowling herself. In her usual tongue-in-cheek style, she painted phrases on the chair like, "I wrote Harry Potter while sitting on this chair."

The massive purchase also came with a letter from Rowling.

"Dear new owner of my chair, I was given four mismatched dining room chairs in 1995, and this was the comfiest one, which is why it ended up stationed permanently in front of my typewriter. ... My nostalgic side is quite sad to see it go, but my back isn't," a representative from the auction house read.

The auction house said the chair represents a transformation by Rowling. The author once told the Daily Mail, before she wrote the "Harry Potter" books, she was "as poor as it's possible to be."

And while sitting in that chair, she wrote the best-selling book series in history.

Rowling donated the chair in 2002 to help a charity fighting child abuse. In that auction, it sold for $21,000. It was later bought by Gerald Gray, the CEO of AutoKontrol USA, and then sold again in this most recent auction.

Gray reportedly plans to donate almost $40,000 to Rowling's Lumos charity, which works to get children out of orphanages and connected with permanent families.

The chair's new owner has decided to remain anonymous.