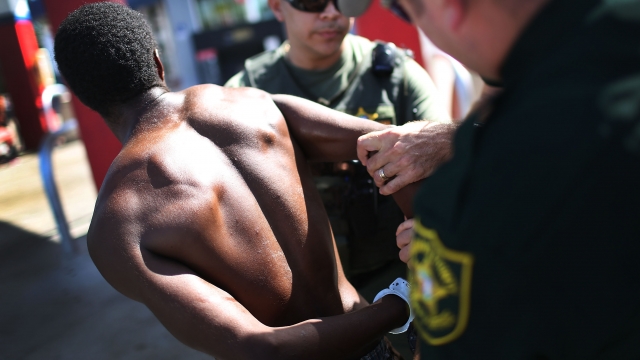 A law professor explains why you should care about convicted felons' right to vote.

"Who better, in effect, to give commentary, if you will, through the electoral process of our criminal justice system than those who actually have to face it?" Dr. S. David Mitchell asked.

Mitchell studies felony disenfranchisement, which is when people convicted of a felony lose voting rights.

About 5.85 million Americans can't vote because of felony convictions.

"They were arrested, they were charged, they were convicted, they were sentenced and they served their time. But they fulfilled that aspect of citizenship. It may not be a positive aspect in our opinion, but they have done everything that we have asked. And then when they are released, when their time is done, we then say to them, 'You are still not worthy enough to be called citizen again,'" Mitchell said.

"There are crimes that are associated with electoral crimes. Those seem to be rationally related. If you commit an electoral crime, should your right to vote be taken away? Sure. … But when you talk about someone who's committed a felony, maybe writing a bad check or something of that nature, and we're going to permanently disenfranchise you, that's a problem," he said.

Hillary Clinton addressed this during a "Good Morning America" town hall, saying: "Once you've paid your debt to society, your voting rights should be returned immediately. That is an absolute requirement for what we have to do."

Ted Cruz disagrees. "I don't know any reasonable person who looks at our democracy and says, 'The thing we need is more murderers voting,'" he said on Fox News.

"If you're going to really be progressive, which is the way I and some other people would push at some point in time, would say, 'Why is it ... that an individual who is incarcerated cannot submit an absentee ballot?" Mitchell said.

"We're talking about them returning to communities. Why not have their voice heard? We count their bodies where they are incarcerated as part of our census, and yet we do not give them the power of the voice of their vote for when they come back home. Now that's a little bit tougher sell."

There are only two states where convicted felons can vote while in prison. Requirements for getting voting rights back vary widely in other states.

“If we want to prevent reoffending, then we cannot create arbitrary obstacles and barriers that deny individuals an opportunity to be re-enfranchised, because doing so means, 'If you're not going to respect me and give me these rights back, then why should I now respect your laws?'" Mitchell said.

In Florida and Kentucky, those convicted of a felony can lose voting rights for the rest of their lives.

According to The Sentencing Project, black Americans are four times more likely to lose their right to vote.

In Florida and Kentucky, more than 20 percent of African-Americans can't vote because of a criminal charge.