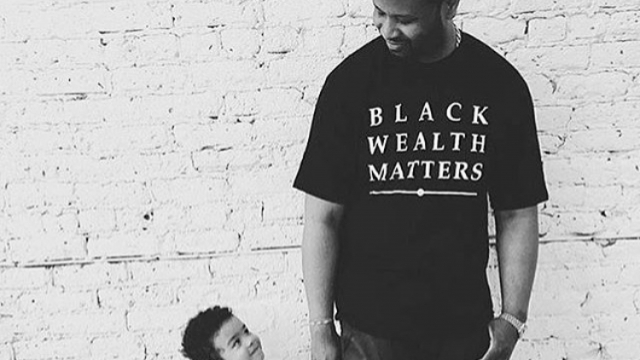 Businesses owners Margaret and Brandon Williamson and their two sons have written a book, hoping to teach children what a Black entrepreneur can look like.

“He's going to be wearing different clothes, and he's going to have a different vernacular. And no child should be shocked that that same man owns a business,” said Margaret Williamson.

But they say the real challenge is convincing the business world.

This Juneteenth, many African Americans are pouring money back into Black-owned businesses. But author and Brookings Institution Fellow Andre Perry says in order for Black businesses to thrive, the entire system needs an overhaul.

The Williamsons say they started their clothing brand PRSVR by cashing in their 401(k)s, and they’ve made millions in sales. They also got a lot of attention when the line was featured on the Fox TV show "Empire." Eight years later they face obstacles applying for loans.

“You're telling me that if another company came to you with our resume of eight years of success, partnerships with, you know, Fortune 100 companies, you know what I mean, partnerships on the highest level, where we delivered 6,000 pieces for the Grammys, that's still not enough?” asked Margaret Williamson.

A 2019 report from the Federal Reserve outlines a disparity in loan approval rates between Blacks and Whites, with 49% of Whites approved for all of the financing they applied for compared to 31% of Blacks.

Sometimes it’s due to a lack of collateral, but not always.

“Most people start their business using the equity in their homes, but homes in Black neighborhoods are systematically devalued, reducing the amount of revenue they can draw upon to start businesses,” said Perry.

COVID-19 isn’t helping Black businesses, with an estimated 41% closing since the pandemic started.

An inspector general’s report found the first round of PPP help from the Small Business Administration failed to issue guidance for lenders to prioritize businesses in rural and underserved communities. So many missed out.

Perry says it’s a cycle. Banks historically approve loans for more White-owned businesses. So when it was time to issue PPP, that went to customers who already had a relationship with the bank.

But a 2020 study from the Brookings Institution shows there are other reasons Black businesses have trouble staying afloat.

“What we found is that businesses owned by people of color in Black neighborhoods actually have higher Yelp reviews than their white peers, but they get less revenue. And that's generally because many people avoid quality because it's in a Black neighborhood,“ explained Perry.

That’s why the Buy Black movement and websites like The Nile List, an online directory of Black-owned businesses, have become so important. They incentivize people to support Black businesses.

And companies like Uber Eats are waiving delivery fees for some Black-owned restaurants. But Perry says change will also take getting rid of the fear of investing.

The Williamsons say they aren’t asking for a leg up but an equal playing field.

“If I’m not getting an opportunity I still go get the thing done that needs to be done because that’s what I was taught. We didn't need anybody to help us. But it would be nice to not have to work as hard as I'm working. When you're giving opportunity to people that have not done nearly as much as I've done,” said Brandon Williamson.