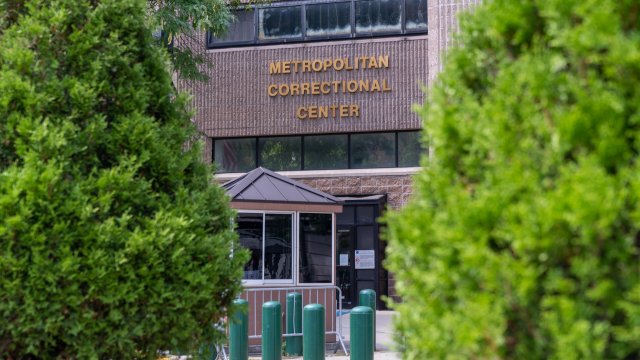 SMS
Epstein Is Just One Of Many Problems Facing The Bureau Of Prisons
By Jamal Andress
By Jamal Andress
August 14, 2019
The fallout from Jeffrey Epstein's apparent suicide in federal custody has been swift, but the problems facing the Bureau of Prisons are not new.
SHOW TRANSCRIPT

The fallout from Jeffrey Epstein's apparent suicide in the Metro Correctional Center, or MCC, in New York City has been swift. Since Epstein's death, the warden of the MCC has been reassigned, two staffers have been put on leave and the jail itself is under two separate investigations.

But the problems with the Metro Correctional Center and more broadly, the Federal Bureau of Prisons, or BOP, are not new. Union leaders in the Bureau of Prisons have been calling for more correctional officers and better funding for at least two years.

The MCC, like many federal jails and prisons across the country, is overpopulated and understaffed. Although the jail was built to accommodate 474 inmates, it held 763 male prisoners at the time of Epstein's death. Overall, the Federal BOP as a whole has lost 7,300 staff members since 2016, with the largest drop coming after the Trump administration's 2017 hiring freeze.

Eric Young, the president of a national union representing BOP employees, blames the Trump administration for staffing problems. Young said in a statement, "The hiring freeze instituted by the Trump administration in 2017 directly led to staffing shortages throughout BOP that are so severe that BOP facilities across the nation are regularly using a process called 'augmentation' that allows teachers, nurses, clerical workers and other support staff to fill in for correctional officers."

JACK DONSON: "We're short-staffed, we're disgruntled, we're being mandated, I'm working two shifts. It kind of feeds that negative culture that they're in. But that's a bigger, broader issue. You know, the Epstein situation is a little symptom of the broader culture of augmentation, under-staffing, and bloated leadership."

Jack Donson is a prison consultant now, but he spent the majority of his career working in the BOP as a case manager. During his time at the bureau he was also augmented as a correctional officer and worked suicide watch.

DONSON: "Augmentation has been going on since the '80s. I used to get augmented all the time. That's the nature of the beast. Now the augmentation, obviously, is out of control. They're augmenting on a much more regular and frequent basis. In the old days, we got augmented for emergencies, you know, maybe annual training periods. But now it's out of control."

One of the officers who was supposed to be monitoring Epstein the day of his death was reportedly filling in as a correctional officer. Reports also say these officers were not checking in on Epstein every 30 minutes as they were instructed.

And while Donson believes constant augmentation is a problem, he doesn't believe it should be blamed for Epstein's death.

DONSON: "My experience doing suicide watch, the average watch is three, four days. ... Nothing was irregular with Epstein. He was on suicide watch twice as long as the average guy. Those 30-minute checks weren't going to save Epstein. You could kill yourself in 10 minutes. They're trying to blame the officers didn't do their rounds. That has nothing to do with his death."

House Reps. Jerrold Nadler and Doug Collins are calling for any records the MCC has regarding Epstein's mental health evaluations. Donson believes those records will be critical to this case.

DONSON: "The documentation is either there or it's not. There's a computer system that they make all these notations — watching the behaviors. So they either did the right thing and it's documented, or they didn't."