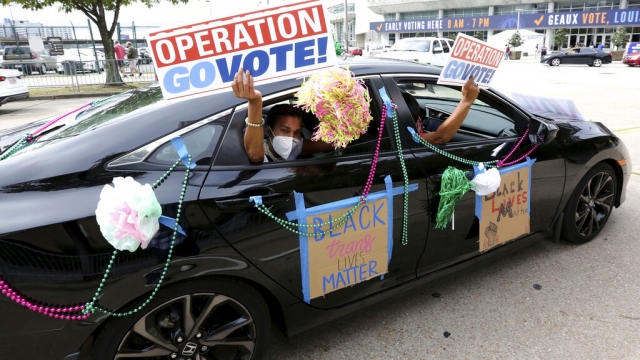 Black voters had an overwhelming turnout in this year's election — despite fears of COVID-19 and limited mail-in ballot opportunities in some states.

Black voters had overwhelming turnout in this year's election — despite fears of COVID-19 and limited mail-in ballot opportunities in some states.

"An African American woman who's a bit older said, you know, 'Sure, I'm at risk, but it would take an act of God for me not to show up to vote,'" said Henry Fernandez, principal at the African-American Research Collaborative.

So what do those voters want to see President-elect Biden tackle first? Henry Fernandez's African-American Research Collaborative surveyed over 4,000 Black voters from battleground states and says two big things motivated turnout: a push for racial justice and the spread of COVID-19. However, police reform has already proven to be tricky for the president-elect.

"That's how they beat the living hell out of us across the country, saying we're talking about defunding the police. We're not, we're talking about holding them accountable,” Biden said in a meeting with Black leadership, first reported by The Intercept.

Biden's leaked dismissal of the slogan "defund the police" led to backlash from some progressives, though he may be in sync with Black voters about the terminology.

"Two-thirds of African Americans do not want cuts to their local police department," said Fernandez.

But Fernandez says when the question is reworded, they overwhelmingly support relocating money to social workers and youth programs.

While racial injustice ranks high, COVID-19 was the leading concern.

"Across the board. African Americans are some of the most impacted in terms of job loss, loss of hours, knowing people who are sick or having gotten sick themselves," explained Fernandez.

National Black Justice Coalition Executive Director David Johns says the pandemic has illuminated the inequities in the Black community and further impacted Blacks who are LGBTQ.

A study from NPR, The Robert Wood Johnson Foundation and Harvard shows 54 percent of Black LGTBQ people were unable to get or delayed getting medical help during the pandemic.

But Johns, an Obama administration alum, says there are certain things Biden can do in his first 100 days.

"The communities that have significant concentrations of poor people, black and Latinx people or people with predisposed conditions are people who are living with HIV and AIDS, that they're the first communities to receive access to any vaccinations and other medical remedies," Johns said.