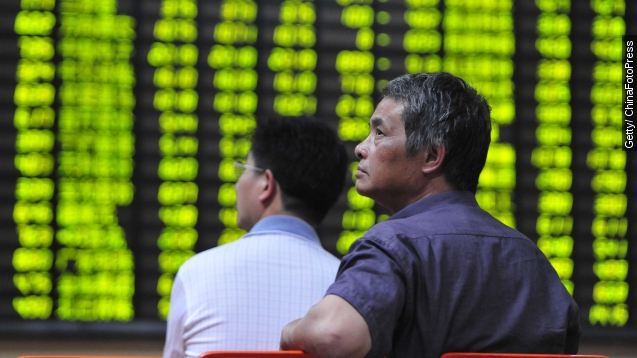 SMS
The Biggest Losers Of China's Deflating Stock Bubble
By Matt Patston
By Matt Patston
June 30, 2015
China's investors are skydiving without a parachute, and there may not be a soft landing for Chinese companies that fled U.S. markets.
SHOW TRANSCRIPT

After flying to the top of world finance markets, Chinese stocks appear to be playing Icarus — and their wings are melting.

The past two weeks have seen Chinese stocks dive amid a sweeping sell-off, which sharpened the fears market analysts have had for months: that Chinese investors were inflating a bubble until it would burst. (Video via CNN)

In 2015, investors have been flooding the market, largely with borrowed money, and pushing company values to record highs. Many of these investors are rushing in without experience — a survey last year showed that two-thirds don't have a high school degree. (Video via New China TV)

Those investors have also used a huge amount of margin debt, meaning that once an investor's stock falls, they're required to sell off the rest of the stock in order to pay back the loans they used to buy stock in the first place.

Margin debt, of course, accelerates a market slide: As value goes down, more stocks are sold, which makes value tank even faster — not good news for China.

But the biggest losers here could be the handful of Chinese companies who, after enlisting on other markets like the New York Stock Exchange, bought back all of their shares so they could de-list and ultimately return to the skyrocketing Chinese market. (Video via Bloomberg)

These companies, coming from fields such as e-commerce and budget hotels, wanted to ditch the slow U.S. markets for all the cash they could grab — like Focus Media Holding, which exited the NASDAQ with a $3.8 billion buyout in hopes of getting even higher valuation in China.

At first, such a swap seems brilliant — the largest Chinese exchange, in Shanghai, is up 60 percent this year, while gains in U.S. exchanges have been minimal.

But if the bubble bursts, such a seemingly savvy maneuver could backfire, and the companies could burst as well. Always quick to turn to market manipulation, the Chinese government announced new, record-low interest rates to try to boost investor confidence. (Video via Tomo News US)

So far, it hasn't worked. Chinese stocks continue to slide.

This video includes images from Getty Images and music from Podington Bear / CC BY ND 3.0.