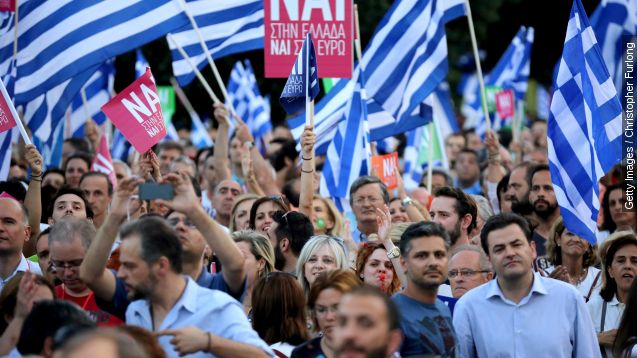 A day after the U.S. celebrates its democracy, all eyes will be on the birthplace of democracy. (Video via The White House)

We’re of course talking about Greece. In a referendum Sunday, Greek voters will choose whether or not to accept the latest bailout proposal submitted by the country’s creditors. (Video via ERT)

Seems simple enough. Except that it’s a bit unclear what they’re voting on. Partly because the whole thing has been rushed.

Prime Minister Alexis Tsipras announced the referendum only a week ago — giving voters days to essentially decide their country’s future in the single currency. Or at least that’s how it’s being interpreted. (Video via ERT)

Despite that, nowhere can the word “euro” be found on the ballot. It’s a lot less direct. (Video via Council of the European Union)

It reads, in part: "Should the proposal that was submitted by the European Commission, the European Central Bank and the International Monetary Fund at the Eurogroup of June 25, 2015, which consists of two parts that together constitute their comprehensive proposal, be accepted?”

The proposals, by the way, were only made publicly available a few days ago.

Not to mention, they were originally written in English, and the versions released by the government appear to have been lost in translation.

Not only is the ballot language confusing, it’s controversial. Somewhat unusually, the No checkbox comes before the Yes option.

“No,” is the strong preference of the Greek government. (Video via ERT)

The latest polls show the vote too close to call. Should the referendum pass, the Tsipras government has indicated it will resign.