The Big Changes In Obama's 2016 Budget In One Chart 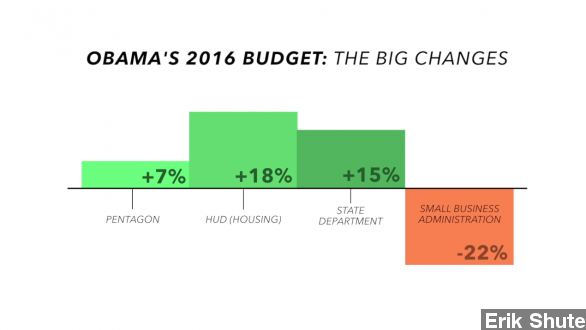 SMS
The Big Changes In Obama's 2016 Budget In One Chart
By Zach Toombs
By Zach Toombs
February 2, 2015
The Pentagon, State Department and Housing and Urban Development all saw funding boosts under the president's plan. But Congress won't go for it.
SHOW TRANSCRIPT

The president's budget plan for fiscal year 2016 isn't a huge shakeup overall, and much of it probably won't fly with the Republican Congress. But if approved, it would mean some big funding changes for parts of the government. Here's how much a few departments stand to gain or lose under Obama's plan.

At first, that additional defense funding doesn't look like much, but keep in mind the U.S. has, by far, the world's largest military budget — about 1/3 of all the world's defense spending and as much as the next nine nations combined.

The president's budget would blow through the spending caps set by sequestration, tacking another $38 billion onto the Pentagon budget. The costly and controversial F-35 fighter would get more funding, too. (Video via Aiirsource)

It all adds up to a defense budget about 7 percent larger than last year's — especially notable because the end of the wars in the Middle East was supposed to decrease, not increase, military spending.

The 2016 plan also gives an especially large boost to a department we don't hear much about: Housing and Urban Development.

The department would get an extra $6.2 billion to use for neighborhood redevelopment. The money's also meant for a program to house the homeless, something HUD Secretary Julian Castro often talks about.

"We'll keep fighting until they get the fair chance they deserve to achieve the American dream," Castro said.

The State Department would also get a healthy bump: about 15 percent. That's partly to deal with a new focus on foreign policy the last year has brought, namely conflicts with Russia and ISIS.

So who lost funding? For one, the Small Business Administration, which comparably didn't have much funding to begin with.

That budget cut is part of a larger reshuffling that would throw the National Oceanic and Atmospheric Administration, NOAA, into the Interior Department. A bit of bureaucratic redecorating.

Overall, the president's plan would increase the federal budget just a bit, to $3.99 trillion. But this year is the first year Obama will be pitching his plan to a Congress controlled entirely by Republicans, and most of the ideas in that plan have already met staunch resistance from lawmakers.

This video includes images from Getty Images and Selbe M / CC BY NC ND 2.0 and music from Chris Zabriskie / CC BY NC 3.0.