The Best Bun In The Oven Announcements Celebs Cooked Up 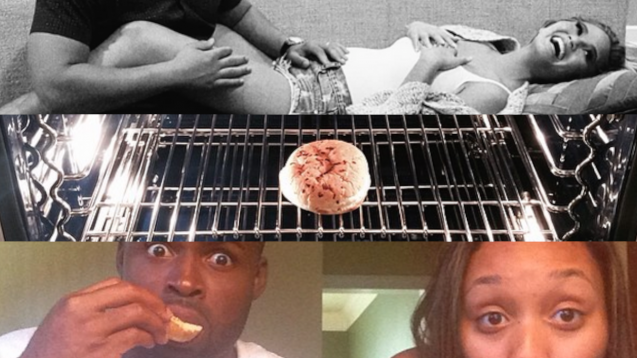 SMS
The Best Bun In The Oven Announcements Celebs Cooked Up
By Cody LaGrow
By Cody LaGrow
October 13, 2015
Chrissy Teigen and John Legend announced on Instagram they're expecting a baby, and we dove into our favorite pregnancy reveals.
SHOW TRANSCRIPT

Don't cry for indulging in pie, Chrissy Teigen. You're eating for two!

She and John Legend announced on Instagram they are indeed pregnant after trying for some time.

We all love to celebrate our friends who incubate life. But I think what we love more is the surprise of learning about it. I mean, who doesn't remember Beyonce's "where were you" moment?

Of course, I'm talking about Beyonce's belly rub heard 'round the world at the 2011 Video Music Awards.

Pink also revealed her announcement on national television, giving the scoop to Ellen DeGeneres. And getting personal about being preggers with Ellen seems to be something celebrities like to do.

"You can tell us all the answer now," Ellen said.

"Do you crave pickles or sauerkraut?" Ellen asked.

"You're not attractive when you're pregnant. Like everybody tells you, 'You glow. Your hair is pretty. Your nails are pretty.' That is total crap," Kelly Clarkson explained.

But what if you're famous and don't want to discuss it on a talk show? Then, you should do what I do when I have a problem: Turn to food for the answer.

Naya Rivera posted a picture of a cartoon bun in the oven. Stacy Keibler threw a real bun in the oven. And Torrey and Chanel Smith revealed they got saucy, which resulted in an out-of-this-world cutey-monster.

If food doesn't get you in the mood, you can use the kids you already have to do the dirty work. That's exactly what Hilaria Baldwin, Jessica Simpson and Jaime King did. But if your only children are canines, take a note from Carrie Underwood.

The pregnancy-reveal has evolved into an art form. Just don't spend too long crafting something creative, or you may find yourself in Zoe Saldana's shoes, whose famous friend spilled the baby beans for her.

"She's pregnant with twins right now, so I'm sure she's got a huge future ahead of her," Britney Spears said.

"Did you give her any mommy advice?" Entertainment Tonight host Rocsi Diaz asked.

"I said you're not ready," Spears said.