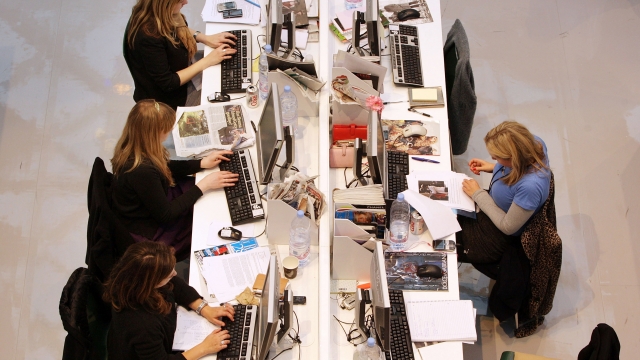 If you got a chance to peek at your colleague's paycheck, would you? Maybe just for a quick second, a little glimpse-a-roony?

You never quite know if your take-home is below above or pretty much average. But getting that info would be taboo in many, maybe most, U.S. workplaces — except those with an open salary policy. The pitch promises transparency and has two basic versions: One, where everybody can see what everybody else is earning, along with an explanation of how salaries are determined. That is the most transparent. Buffer, a social media marketing company, flings open the financial doors, calling it a core value.

The second version does not disclose each employee's salary, but it does share with employees the formula for determining salaries. This can include average pay for specific positions or pay ranges.

The federal government's salary table is an example, with grades and steps laid out in detail. Glitch, a software company, takes this route also.

Employees at companies with open plans also spend less time — if any — trying to figure out what others are earning, and a well-mapped salary scale provides a blueprint for advancement.

But there is a caveat: Resentment can still fester. Management needs to lay out a clear explanation of how salaries are determined, like if they pay more for experience. If the salary explanation isn't detailed and doesn't logically break down why employees with the same responsibilities could have different salaries, an open system could backfire — leading to frustration, maybe even departures. And even if all of these are implemented, realistically, how many employees believe their peer is worth $10,000 more than them, even with all the transparency in the world?

It's tough to know. But openness advocates think it starts by eliminating what employees learn from gossip or sneak peeks at their neighbor's W-2 left on the printer.